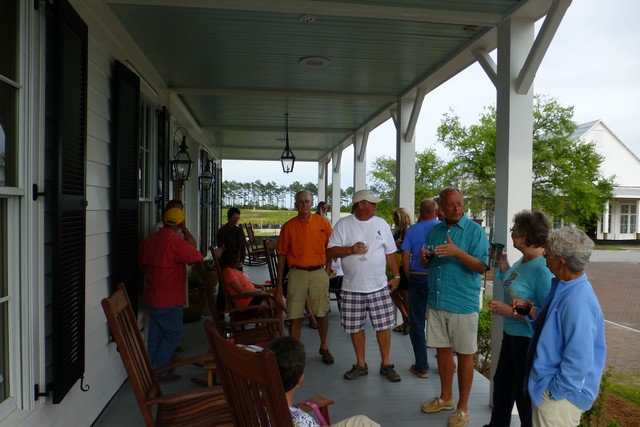 A late start today, the bridge we need to go under does not open until 8:30 AM. So we had time for a hot breakfast at the Dock House Restaurant that’s about 500 feet from our boat. Or so we though. We got there at 7:30 and got coffee and placed our orders right away. But by 10 after 8 there was no food in sight. Sigh. So we told the waitress to make it “to go” and about 5 mins later got our bag of food and headed back to the boat.

We slid around the corner to the bridge behind Seahorse and we were soon met by “Triad”. Triad is one of those go fast trimaran boats that has hydrofoils on the pontoons. We had talked to the owner a few days ago in Southport. He had said it will sail at just under 25 knots. Under engine power it would do 8 knots.

Promptly at 8:30 the Beaufort bridge opened and we were under way. The first 30 minutes of the trip is in pretty open water in the river. Once we entered the southern end of Cord Creek it would be a 100 yard canal and pretty much no wake for the next two hours until we got to the Neuse River.

At the entrance to the Creek was a sign that said “Will you marry me Leslie?” It was pretty weathered, we all hoped the answer was yes!.

We puttered along looking at the houses, a marina that was a “Great Investment Opportunity” (I have a copy of “Richmond’s guide to making a million dollars in the marina business.” It has a single page, “First take two million dollars….” ) There was a few dolphins along the way, but they were not interested in us, but were in the seafood we stirred up as we went along the bottom.

Along the way we met, and passed, the sailboat “Pagan Chant”, we had see him a few times since Marineland, it was nice to see he was still making good progress.

Once we were on the Neuse the water went from very calm to “moderate chop”. We were soon entering the channel at River Dunes. River Dunes is one of those fancy marina / expensive carriage house / McMansion planned community. They have 12 permenant residents now, but are building another 1100 houses.

Before Docktails I met the very nice people that run Active Captain. I love Active Captain, it’s been a great help finding marina’s to stay at.

I also met the Captain of Sanctuary. He is a super Looper, he has a ton of great information and things that he posts on the forum. He has the best answers when he posts. A very nice guy to know on the Loop.

We had 10 boats for Docktails and then dinner. It was a pretty grand evening with lots of people meeting for the first time and getting a chance to know each other. The food at the yacht center was very good, the fried grouper looked great, the fried chicken and waffles had the sweet and savory flavors rolling, brisket was tender and juicy, all in all great meals.

After dinner there was an amazing sunset that everyone got pictures of. It would be interesting if you could stitch together a giant mosaic of the sunset from all the views.

Up early on Thursday, we were the first loaner car from the marina. Out at 8 and to the Piggly Wiggly by 8:30. We did serious provisioning with me buying junkfood, soda and snacks, while Susan does proteins a set of salads. Lunch meat and bread. I’m still in provisioning like I was a sea scout, lots of carbs (peanut butter crackers, pop tarts, etc). It’s very good that she’s cooking.

I was able to find 4 quarts of Amsoil to get me the yacht harbor in Norfolk to get some minor work done. I’m all tanked up and ready to go.

I tried for the second time to get a haircut, the guy didn’t show. I called into Oriental and asked for a 3PM and got shot down. So the psycho Santa beard is slowly coming to life again. I spent most of my day doing laundry and getting posts out and dealing with other email our there. As I started the loop I’d get email that I’d blow off since I’d need to deal with it in a year. The year is up and now I need to be better.

Docktails was fun, a few boaters showed up and we had a good chat. Two of the boats live hear, so we spent time about outlining easy trips North and South that we could recommend.

Dan brought his son’s beer. Dark color, slightly creamy mouth feel, can taste the two kinds of hops. It had a big head that stayed as we drank it.

Big discussion, go or stay. I want to go, the weather looks good and there isn’t a compelling reason to stay. We are docked far away from the center. It’s a 20 min walk to the “really cool showers” and the rental car is a pain of 90 mins where 60 of them are to town and back.

The weather on Friday will be like today, so it’s a low risk move to go 40 miles north. In my case we get docked at a city that has stuff vs out here with bad wireless and nothing to go to. The problem is that the current spot as meh weather for the next 6 days, not happy to sit and wait that long.

Dinner was enchiladas with chicken and cheese and corn on the cob. Very good, she has some green salsa that is very good.

Flashback, we were in Half Moon Bay this time in 2014