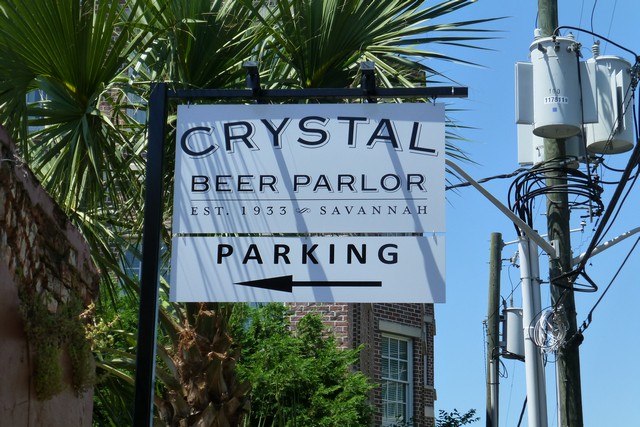 A very pretty sunrise, Susan got a great time lapse from the top of the boat. I need some more practice backing off the dock with a current, it was a little messy this morning.

The ride north was nice, lots of pretty places to look at. Lot of dolphins today. One big pod of about 10 was feeding in the middle of a no wake zone. Susan yelled and waved at them, but they had other things on their minds.

It’s also interesting boating with the tides down here. We cross a number of sounds so sometimes you are with the tide doing 10+ knots, others you are against the tide going 6 knots.

We arrived in Savanna before lunch so we had the whole afternoon to walk around.

First stop was the Crystal Beer Palace. This is one of the older places in Savanna. We had a great lunch of fried green tomatoes, crab soup and shrimp salad sandwiches. All the goodness of the south and some beer too.

From there we walked 5 blocks to The Distillery. It’s a giant bar with over 30 beers on tap and some great food. We had the deep fried moon pie, it came with great vanilla ice cream with a caramel sauce with whipped cream on the side.

A few blocks later we went to the Savanna Maritime Museum. It’s small but does a good job of describing maritime activities in Savanna from the 1700′s through the civil war. It then covers all the boats named Savanna across the next 200 years. There were lots of ship models, lots of detail work in them. Down in the basement is a pretty good collection of ships in bottles.

Across the street is the bookstore for the Savanna College of Art and Design. We loved it. There are three floors of great stuff from drawing, sculpture, different papers, pen, ink, paints, and so on. Lots of great art books, electronics. Business plan creation, etc down in the basement. Looks like they do a lot more in Art and Design than I would have expected. They have about 40 different majors from different arts, cartooning, theater, textiles, writing, etc. It really makes me want to go back to school.

We walked through the central market areas. For a Tuesday it was really loaded up with tourists. We cruised through and ended up at Moon River. (Moon River was one of most famous songs to come out of Savanna. ) It was a cool brewpub, we had a single flight of beer to cool down from the walking.

There are a ton of small squares in Savanna, all with benches and statues in them. One of the main streets, Bull St, has 5 of these squares, it must make driving around town very interesting. The grounds are well kept and there are huge trees everywhere. I can see why Savanna is a big tourist town.

We forayed into the restaurant district, Savanna has lots of places that are well known, we were looking for something a little more low key. We had gone into E. Shaver. Bookseller to look around. We asked directions to a place Susan had found, they were closed for dinner M-T-W, they offered up a place called Fire. It’s Asian Street food, so it’s easy to eat. We had the best fresh rolls and dumpling that I’ve had in quite awhile.

Afterward, we collected a taxi and got a ride back to the marina. We got on the boat and fought with the crappy Adobe DRM system coupled with Comcastic login mess to try to watch Mad Men. Final result was to pay $2 to Amazon to watch the latest Mad Men.

It’s nice to have good wifi in these marinas, makes it easy to keep in touch with the world.

One thought on “Savanna, GA”