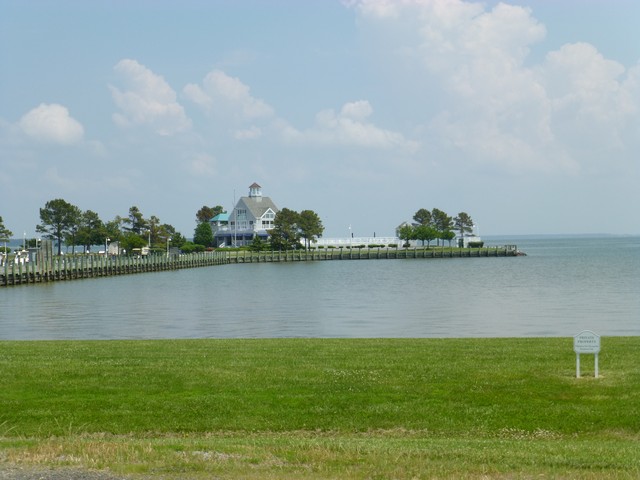 Looking for lighter winds in the morning we got out of the marina at 8. There were a number of other boats that had the same plan, we were part of a parade that motored down the Patuxent River. It was a pretty smooth ride and soon we were turning North to head up the Chesapeake. The good news is the Bay is starting to narrow, you can see both sides when you are in the middle channel. We laugh on the trip, the chart plot for the first trip on the Quo Vadimus from Chesapeake VA to Bohemia River is still showing up.

Ahead is the Cove Point Natural Gas Facility. It was built in the 1970′s for that decades energy crisis. It fell to disuse in the oil boom of the 1980′s. It was resurrected and expanded in the 1990s amid a huge amount of controversy over having an LNG facility (that may go Boom) near to a nuclear plant (just a few miles at Calvert Cliffs). But the proponents won out and the expanded site went into operation. Enough gas can be stored to heat 375,000 home for a year. So the tank farm and the unloading port are both huge. But wait, there is more. With all the fracking going on the companies that own the port want to use it to export LNG. So the controversy continues.

Just North is the Calvert Cliffs Nuclear Plant. It was built in the 1970′s and as a budding engineering student the day long field trip to see the plant was great thing to do. (My father had contacts in the 1970′s and the “stranger danger terrorist” hoopla hadn’t started. One of the side effects of the plant is that it heats the water of the Chesapeake and the fish just love it.

As we traveled along we ran into a number of 50 foot pools of fish that were swimming on the surface, the striped bass season was getting ready to start. The smaller fish swimming in school as protection are easy snacks by the much larger “rock fish”.

Around 11 we turned into the Choptank River and ran into a problem. As a mariner, I watch the charts and they are the guide. But the Coast Guard / Corps of Engineers often move buoy’s to match the actual condition (shoaling, channel moving, etc.) So the rule is follow the buoy, then follow the chart. Unless the buoy is really wrong then follow the chart at low speed. We’ve seen buoy’s set up in strange configurations in the river where you follow an S bend to get around them. But it looked like the red markers had been moved. Remembering that there had been heavy ice in the bay I dropped speed, followed the chart and kept a close eye on the depth finder.

That worked well for both of the markers that were well out of position. By noon we were tying up at “Tilghman on the Chesapeake” Marina. Tilghman’s Island has been around since the 1800 and has been home to oyster-men, crabbers and summer vacationers. In the old days you came by Steamboat and stayed the week until the next steamboat arrives. Today you wait in traffic to come across the Bay Bridge at Kent Island, fight your way down Route 50 through Easton and then down Rt 33 into the island. By the time most people try that they are tired in either Easton or St. Michales, so they stop there.

We unloaded our bikes and headed into the town center about a mile away. First stop was “Two if By Sea” for lunch. Susan went for fried rock fish, I went old school with a grilled cheese and bacon sandwich. After we finished lunch we biked into town and across one of the few remaining 24 hour drawbridges in the US. It’s a very pretty place, lots of work boats that go out every day for crab or oysters, a smattering of pleasure craft for the locals. The fishing is great and there lots of water to explore in all of the coves of Talbot County. The Choptank River is to the south and the towns of Oxford and Cambridge are a short ride away.

Back to our cool boat for naps and catching up with things around the boat.

Towards 6 PM we headed off to dinner at Harrison’s. They have been a Tilghman destination for years and years. They were one of the first places to take boarders in the 1800′s. Dinner was good but it started us remembering other dinners that we have had on this trip. Some of our favorites were Susan’s Birthday dinner in Atlantic City at Docks (with the puffed potatoes), Dinner at the top of the CN tower, our first Fish Boil in Door County, and 2”Pork Chops at Patti’s. One that stuck out was from a year ago today, doing the lunch truck rodeo with my Sister in Rochester.

We cycled home happy and contented. Just 60 miles to go to the mythical Loop Crossing, wonder if there will be a buoy at the mouth of the Bohemia.

One thought on “Tilghman’s Island, MD”