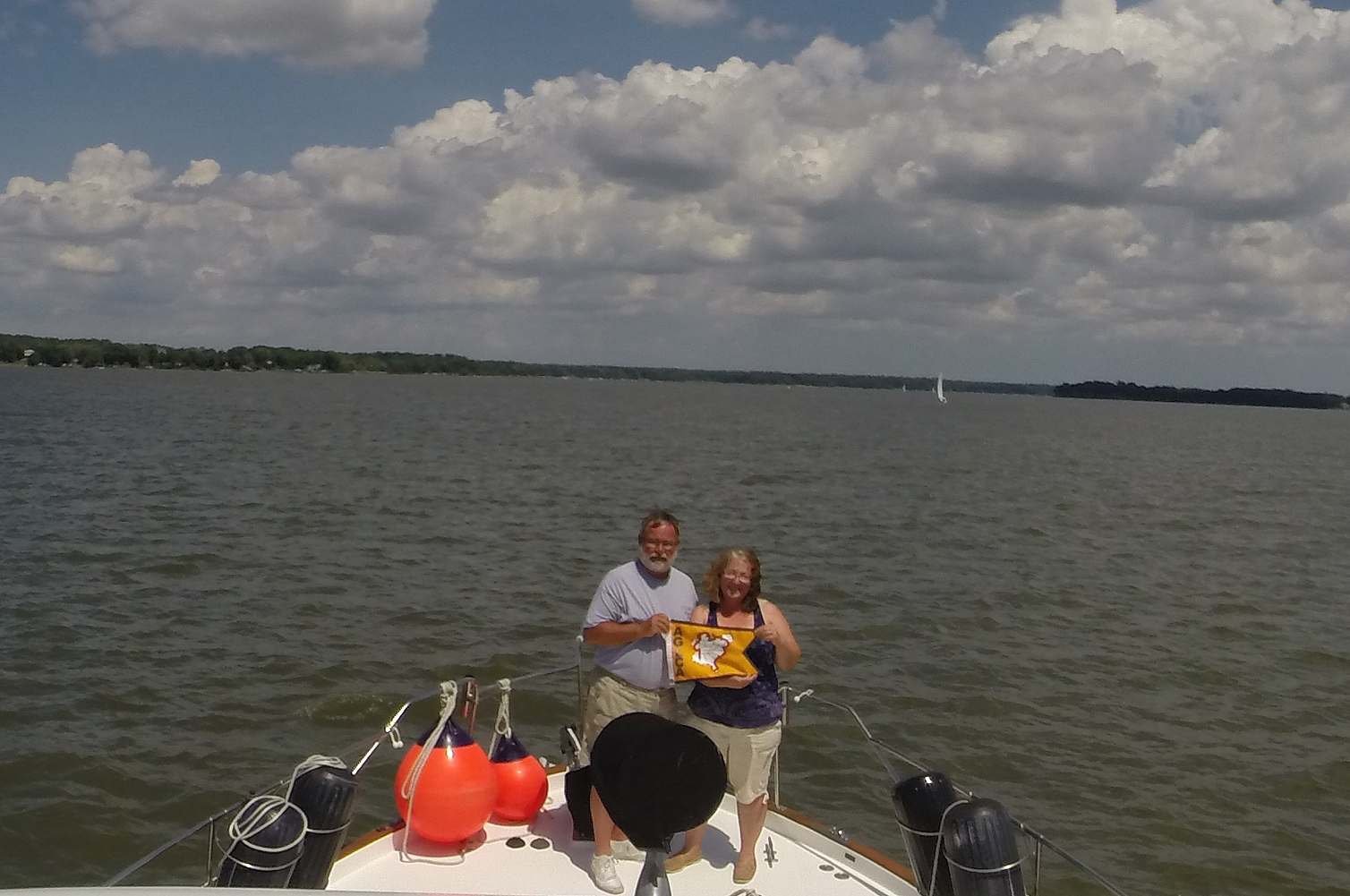 We have become weather mavens the last 13 months. Today the winds from the South at 10 to 15 knots, gusts to 20. That means 2′ waves from the South. Gusts to 20 means they will be white caps and will start to build. Weather for Sunday is the same plus showers. So rather than do two nice days of 30 miles we will do one long day of 60+.

So it’s up and ready to leave the dock at 6:30. We are off and rather than go South around the island (and head into the waves (bounce, bounce) we will go through the famous Knapp’s narrows. While we did our last lock in Virginia two weeks ago, today means a drawbridge. We head out, call the bridge operator and he will open when he sees us. So push off and a little before 7 we are looking at the “closed” bridge. The boat behind us reminds the operator we are there, and by 7 we are on our way out into the Chesapeake.

We need to run West before we can go North, but that means broadside waves. I head SouthWest to quarter into the waves so we get a little bounce and a little roll for about 3 miles (half and hour) until I can turn 90 degrees and go North West.

It’s an OK day on the bay, 2 foot waves are nothing to the hard core fish guys and they are out in droves today. Lots are out trolling, so we need to watch out for the trolling boards that are about 50′ behind the boats. Most of them have flags on them so they can be seen. The captains have done this before, so it’s not much to keep out of each other’s way. But the autopilot isn’t happy about being pushed around by the stern waves so there is some bow dance that goes on.

By 9 the Bay Bridge is fully in sight as is a container ship coming up fast behind us. I call and he is doing 16 knots to our 8 so we pull to the side so he can pass us on the “One”. Susan got some great pictures of it going by and then later on on under the bridge.

At 9:30 we officially entered the Upper Bay and with a little luck we would be docked by 2:30. Oh, but as Mark says: “the tide givith and the tide taketh away” and I was now looking the wrong way at a falling tide. Oh well, we will slog along at 7 knots.

For the next few hours familiar places slid by. It was nice to start going “hey I’ve seen that before”. Love Point, Swan Point, Fairlee Creek, Still Pond .. At 2PM we passed by Turkey Point Light and we were officially in our home waters.

Susan has been doing GoPro time lapse photos along the trip, little mini movies of our adventure. So at 2:32 in the mouth of the Bohemia River we both stepped to the bow and held our Gold Looper flag, we were GOLD LOOPERS!

Susan took down our white flag and put up our gold one. We did a tour down to the 213 bridge to see if we could find any of our boater friends. A quick spin and we came back to Bohemia Bay Yacht Harbor, our former and now home again. A 90 left, 90 right, spin starboard, bump it, bump it, shut it down and we were home!

Across the next few day’s we will post some trip wrap ups and stats so keep an eye out here.