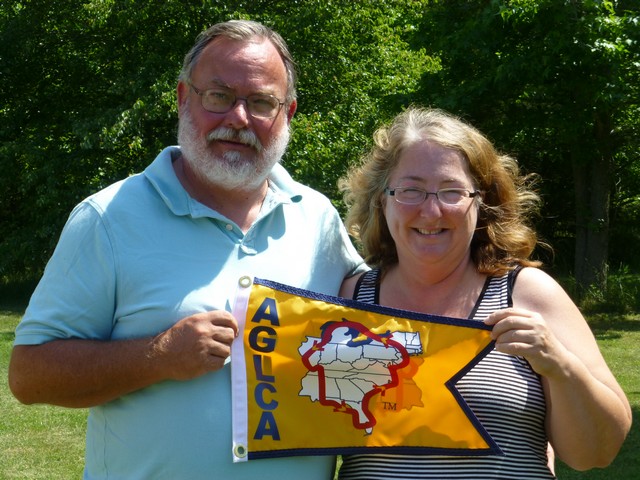 I want to thank Susan for going on this trip with me. She was great getting us docked or anchored at the 154 places we stayed and locked through the 105 locks we did. She made lots of fabulous meals and made sure we got fed even when we were too tired to think or eat. Susan was right there when there were problems like at Mill Lake, coming into unknown locations at dark and helping navigation in scary waters. She also did an amazing job with finding places to eat and visit. All this keeping a sense of humor and doling out the snark.

I’d like to thank the US Coast Guard, Canadian Coast Guard, Army Corps of Engineers, Parks Canada, Parks Ontario and the NY State Canal system. Thanks to all the marina’s that gave us safe places to stay during storms, finding a mechanic on short notice, loaning us cars (all with check engine lights on ?!?) and showing us warmth and local hospitality. Without all of you there wouldn’t be a Great Loop to travel.

There were lots of Loopers on the way from our very first Loopers, Barb and Tom on “Toba“ that we met the second day out. “Serenity” with John and Kathy organized the first Docktails we had in Perry Sound. Roger and Wendy, the crew of “Le Hooker” showing that not just big fat trawlers do the loop. Stories from “Nuclear Fishin” by John and Susan about how sometimes bad things happen but you’ll get by it. “Reunion” gave us a ton of places to stop in Door County, Dennis and Carol then hooked us up with Kringle in Racine.

“Moondance” skippered by Berwick and Alexis led the “Looper Flotilla” down the Mississippi, Ohio, and into Green Turtle Bay, mostly on one engine. All the Loopers in the Flotilla became friends, a special thanks to all of you because we all watched over “Diablo” and kudos to “Roxanne” in becoming the little “Tug That Could” for towing a flotilla member out of our last lock. Sonny and Phyllis on “Corkscrew” – we’ll see you next year. The thrill of meeting Looper legends like the crews of “Carolyn Ann”, “Beach House”, “Sanctuary” and the master weather forecaster Tom and wife Patsy on “True North”. We also met Steve from the AGLCA, we’ll meet up with Janice and Kim another time.

Mark and Becky on “Mara Beel” for making the Ten-Tom a great ride. To all the Loopers that spent so much time in Apalachicola. Mary and Roger on “Ta Ta” putting together a Thanksgiving Dinner that couldn’t be beat for 22 people. And all the boats that went across the next day, I think it set a crossing record. “Pier Pressure” with Eric and Pam and “Prime Interest” with Lester and Irene were in my group that made our crossing go smoothly. Robert and Linda on “Errante” were a help on a number of times cross checking my course plans.

After our winter break with soon to be Loopers “Lake Effect” with Peggy and Dan we started meeting up with Loopers we had met before. We hung out on a few legs with “Seahorse” with Dan and Angie and the new Loopers of Charlie and Kay on “Plane 2 Sea”.

But Loopers were not the only boaters we met, and we were impressed on how many really nice people we met. For example as I ate my weigh in Canada in butter tarts, lots of people shared home made ones with me (they are much better than store bought).

The crew of “Akasha” and “KatyaLookin” made our first nights in the Georgian Bay special. “KatyaLooking” gave us the first inkling on how we should not stick to just the cruising guides by sharing Hope Island with us. The group at Wright’s marina were nice, but “our best friend Pierre” gave Susan his 5 best fishing locations and she caught a 33” Northern Pike. And no, those GPS locations are not available. “See Y’all” (Alan and ‘Dammit Sheri’) helped out when I earned my North Channel boater stripes. Or the boat earned the stripes as it may be, but it was all good. Because we were close, we did the far North Channel to Sault Ste Marie and I earned my “boated in all the Great Lakes Badge” We met amazing people, saw great places and had a great experience.

Susan’s bucket list included Mackinac Island. While there we got a tip from “Lollygagger” to go to Beaver Island. It was a good idea as we headed through the fog. I had practice runs with the radar, but this was our first time trying to miss boats in the dense fog. A little scary to just make out the Mackinac Bridge as it goes overhead.

We made Beaver Island and met a boater there and got sucked fully into doing the “Western Shore of Lake Michigan” Did Manistique, a great town and a great winery. Went to Fayette and the Snail Shell and met more people. Then Bay d’Noc to fish. Or I should say to catch. We have a big thumbs UP for the Upper Peninsula.

Then it was the West Coast of Lake Michigan. Fish Boil? Boiled fish “Is that some weird British dish? “ Wow they are cool. We had three on our trip. We went to Sister’s Bay, Devil’s Door and we saw Sputnik stuff. Door County was a blast, who would of though Cherry Salsa would be so good? Milwaukee was our favorite big city.

We met of other boats that were not on the loop and we tried to drag them over “Hey We are doing the loop, We Have Cookies!”. We got some to join, and others said they would think of it for their golden years. We created lots of new Docktail friends.

As a Bayliner owner, I’m on the Bayliner forum. I ask questions and get good answers. “If do the loop and spend 25-30 days in Canada, what will I see?. Your chart plotter.” So I ask about options and I get a 60 day plan to see Canada. I meet Terry who gives us a great tour of all the smaller spots in Perry Sound. Later on we meet Doug and Mona who consider Baie Fine home. We get fishing lessons, fish cooking lessons and most importantly how you can live on the Canadian waters for almost free. So much to do, so much to see, so many places in Canada for not a huge cost. And we did everything suggested. I also met Bayliner Members all along my trip, it was great to match names with userID.

The Bayline Board was also a help with mechanical questions that I had on the way. It’s always great to get help when you are in remote locations.

Once you reach Florida after starting on the East Coast, things should slow, but for us they sped up. The great times on the panhandle, doing “the crossing!”, the Florida West Coast and then meeting our new family in Tavernier. Tavernier was a never ending series of Docktails, smoked meats, the conch shell marching band, lots of good conversation and stories. Jeff you were right was very, very hard to leave in March; had we stayed another few days and we would still be there.

Our last months have been just as much fun as the first were. Coming up the ICW and visiting all the small towns. Taking the Dismal Swamp Route and going back in time. Up and back the Potomac to get a huge dose of US History.

Lots of Looper support with places to go, things to see, and so on. The harbor hosts we have found were super special they made our lives easier. Congrats to Freya Petersen and Don Bennett for winning the Harbor Host of the year award, you made your part of Canada very special to us. Ron thanks for your help in both Illinois and in Florida. The on-line Loopers that post about things they have done and a huge amount of details has been great. I was happy to be able to contribute back. It was great to meet some of them, but I’m not getting off the water, so there is still time. (Look for the boat with the hughe orange lock balls and gold Looper flag.)

If I’ve missed mentioning you, sorry about that, but I’m going to bet there is a post about you and pictures of your boat on our site.

We’ve lost two key people in our lives, Susan’s father and my favorite aunt, Aunt Hazel, passed away while we were gone.

Last but not least, kudo’s to my little buddy the autopilot. You steered for most of the miles and you did a great job. Sorry about dumping the wrench bag next to you and then whining about your skills until I moved it back. But you made the trip really easy to do, I can’t imagine driving 6,000 miles.

Buy a boat, get rid of half your possessions, put the other half on the boat, sail away with a person who is as crazy as you are, drive the boat 6,000 miles, visit over 160 different places that you have to dock at or anchor at, traverse over 100 locks, put up with wind, rain and the dark. Have your friends and family say that you are on vacation but you find yourself in a different job of 7AM to 5PM of trying to manage your new lifestyle. That’s the easy part.

Meeting and remembering 100′s of new people and places; being on the go so you don’t miss anything in the towns, cities or vast amount of open nature that is out there. Eating 3,000 calories a day of the freshest food and finest deserts (yay Butter Tarts) that you can get in 15 states and Ontario. That’s the hard part.

While we are arriving home without our beloved cat Belle, we’ve come home with 100′s of new friends, thousands of memories (and the pictures to go with them) and the sense of accomplishment for achieving a long time goal (40 years in the making!)