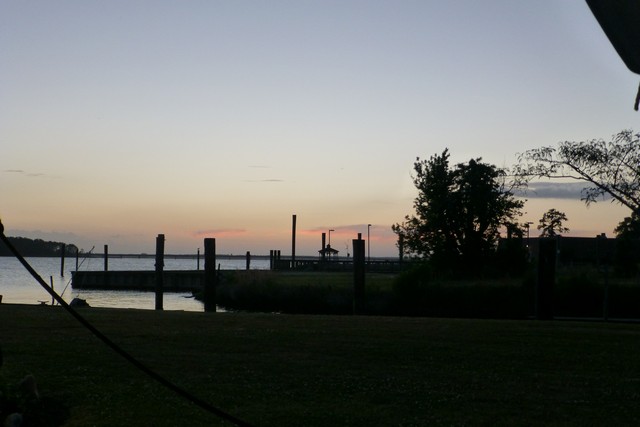 As of last night I was going to read the weather in the morning and decide. We woke to rain an it seemed that the decision was made for us. Our travel boat decided last night they would stay, so it seemed to be an easy decision to stay.

About 7 AM it cleared off and started to really brighten. The weather radar showed the band of storms had moved north east and there was not a band behind them. Ummm maybe we should go. About 7:10 I watched a boat leaving the dock. I did a quick check of all the weather and decided we would go. So about 7:30, an hour after we were going to leave we pushed into the basin and headed out. I radioed back to our travel boat, they were going to stay.

Out into the Neuse River it got a little rough, we were in 2-3′ seas with our bow slicing through them. (The Neuse is often referred to as The Naughty Neuse), For us the Naughty part came 45 minutes into the trip when we turned so we were no longer sliceing bow first through the waves but taking them on the starboard quarter and some abeam. So we traded a bow/stern up and down by adding the motion of rocking side to side. This has a weird corkscrew feel. Lucky this only lasted 15 minutes and we were deeper into the river and it changed to moderate chop.

We entered the Bay River which leads to a canal. So moderate chop became flat. I burned some extra fuel flying through this section. We had 36 miles to do today, so going fast in the easy sections means I can slow and match the water in the rough sections. Out of the canal and into Goose Creek, and the chop started to build. We soon were in the Pamlico river doing our bow slice wave trick so it wasn’t a bad ride. We needed to turn up into the Pungo River, which would have made us go back to the roll/corkscrew motion. Except I ran a little farther to the eastern shore of the Pungo and turned up. The wind was blocked by the land so the waves were down to moderate chop and we followed that north to Belhaven. So other than the small amount of bounce in the Neuse, it was a pretty good trip.

Mostly blue skys, only a few gray patches. One place it sprinkled, but all in all a much better day.

Got into Belhaven at noon. We are along a wooden bulkhead that has two dozen of the lock bumper balls that we use. It’s a nice marina, good docks, power, washer/dryer, nice baths with showers. Downtown is a few block walk and I got the loaner car to go to Food Lion.

Food was great. Lunch was at Fishhooks, they had a lunch buffet for $8 that has some of the best fried chicken on it. Also pork chops, cheese with macaroni flavor, cheese with broccoli flavor and cheese with potato flavor, butter beans, succotash and sweet potatoes. If you are into fried foods and things with cheese, this is the best $8 you will ever spend.

Did email and planning for the next leg: Alligator River, Elizabeth City, Dismal Swamp (overnight), Atlantic City Yacht Harbor for some minor maintenance. Plus lots of looks at Tropical Storm Ana and what she’s going to do. It looks like it will get to me while I’m in Elizabeth City NC, so I’m pretty good with that.

Did the oil check and added some oil these last few longer, high speed runs have gulped down some oil. I check and top off when needed. We also filled water tanks, so with a pump out at River Dunes and water, we are good for the next 7 days and that takes us past the Dismal Swamp. Yay planning.

Dinner was at a place called Spoon River. Very nice decorations. Inexpensive beer and wine from local North Carolina Breweries. I went for the mussels appetizer. Mussels, sausage, onion, tomato boiled together. Served in a bowl with cheese and more sausage on top. Oh and a loaf of bread and a spoon to get all the broth. If you go, don’t mess with the menu, just get the mussels. Oh and when they offer the side salad, say no, it’s a distraction, the musses are the main attraction. $12, and a $4 beer and a nice tip you are out of there for under $20. It’s a no brainteaser. Or opt for the second beer and scramble around for another fiver for the tip. BUT GET THE MUSSELS.

It’s Friday night the places are hopping. We stopped in two on my search for Wooden Robot Beer. No luck, but we still have 145 miles of NC to go, I may get lucky and find a place that has it.

Off the dock in the morning to shoot 50 miles to see if we can stay ahead of Ana. I’m voting for the model that shows her going inland and up through Tenn and Kentucky helping out with spring rain.

[Flashback – one year ago we were in Newburg NY and took a trip to see Orange County Choppers and the Motorcyclepedia, and we had our first guest cruiser aboard]