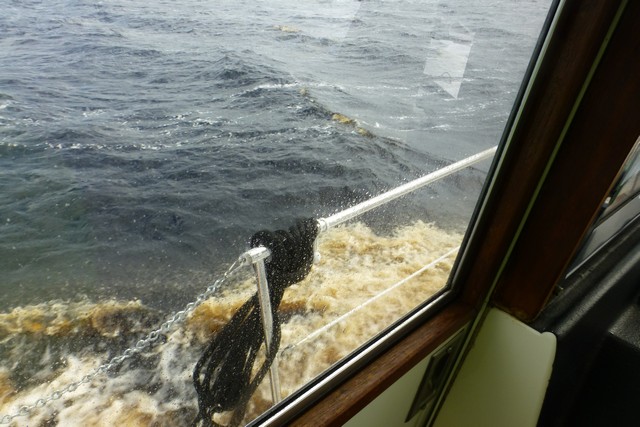 I like it when a plan comes together. I’ve been watching (now) tropical storm Ana since we were in Myrtle Beach on 1 May. It had started out as a tropical depression and took it’s time forming.

Got a good briefing by Hank at Southport two days later. The depression was still taking it’s time to pull together, nearest estimate was landfall about 6 May.

We got to River Dunes on the 6th, it was a depression on the 6th, and made Tropical Storm status on the 7th. Most of the Loopers we were with were thinking to wait out the storm there. Mine was to continue to head north.

The storm was on a very slow NW/NNW path at between 3-5 miles per hour. It was out to sea about 230 miles, so landfall would be the morning of the 10th (2AM to 8AM was the spread). It looked like it would land about the SC/NC boarder and then turn north. The farther inland and north it goes, the more it dissipates the storm intensity. Being north would be good, less storm to deal with.

I decided on the 8th that we would move north. There were rain bands in the area and I almost didn’t go because it was raining. It cleared off and we were gone by 7:30AM.

We traveled to Belhaven the first day and Columbia the second day. We are at dock looking at at a blue partly cloudy skies.

I just got done reading the 2PM forecast on 9 May. Center of the storm will hit the SC/NC boarder about 8AM on Sunday. So that is close to my 48 hours to landfall guess. We are presently 250 miles NNE of the estimated landfall point. The storm at 2PM was 85 miles SSE of Myrtle Beach, or about 300 miles due south of us.

We will leave Columbia about 7AM and travel to Elizabeth City, we should be there about 10AM. To the south Ana will have turned north and be heading about 10 MPH towards me. Winds only extend out about 150 miles from the storm center, so I’m still looking at 10-15 knot winds for the trip

Ana will arrive in River Dunes will be about 8PM on Sunday. There will be heavy rains an the winds will be 60 MPH.

Arrival time in Elizabeth is about 8AM on Monday (well after I’m in port on Sunday).

Winds by then should reach tropical depression status, about 35 MPH, but we will still get lots of rain. I’m good with rain, it’s the high winds that bother me, no matter where you are, the winds still move the boat around.

By Tuesday morning the tropical depression will be off NYC, and the rain should have cleared, that will let us have a great trip through the Dismal Swamp.

One thought on “Tropical Storm Ana”