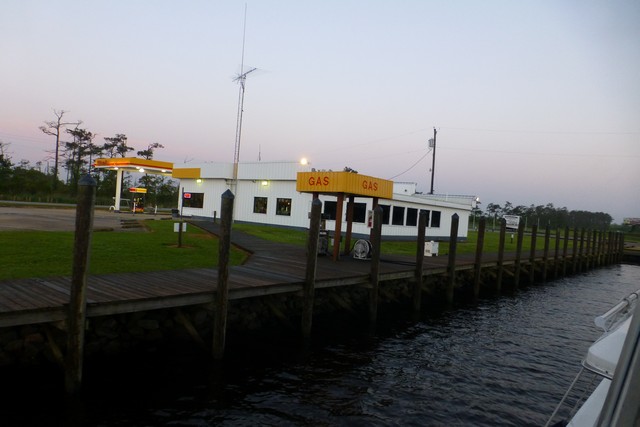 We pushed out of Belhaven early in the morning. The winds are lighter and we needed to cross a sound and get up the Alligator River. We had some rolly boat moves on the day before with us leaving later in the day.

We backed out of the marina, it was easy with the wind on the bow and no current. We turned and headed back out the Belhaven breakwall. Once we got back into the Pungo River proper there was some moderate chop for the next few miles.

One of the interesting things to me is all the canals that were built. Most of them are before the civil war so it was mostly human power that built them. Men, pack animals and machines digging miles and miles of canals.

About 90 minutes leaving the dock we were in the Alligator Pungo River Canal. It’s over 10 miles long and connects the Pungo River to the Alligator River. It cuts the huge distance that would need to be covered by going out in the ocean. It’s also well protected, so merchant boats would have had an easier trip. It’s flat and calm in the canal and there isn’t much of a current flowing either way.

There was boat traffic today, we saw both power and sailboats heading in both directions. Boats going north were like we were, trying to beat the storm. From the home port on some of the sailboats they had a long way to go.

Turning into the head of the Alligator the wave action caused by the winds put us back into a moderate chop. But it was a blue sky day and it was nice to be on the water and moving forward. The Alligator is a long river and it took a fair amount of time to motor up.

We reached the swing bridge at the same time as “Antares”, a sailboat we’ve seen off and on for the last two weeks. With the bridge having two sides (it swings from the center) we sailed through together. After we cleared the bridge we turned left and headed towards the shore.

At the base of the bridge is the Alligator River Marina. It’s next door to a gas station / store / home cooked restaurant. The marina is well protected, there is a break wall that blocks all but a direct east wind. Since we had done so well backing up this morning we spun the boat and backed into our space. This would make it easy to get out in the morning. The dock was the perfect height to step off our boat at the pilot house.

We were set to go to dinner, there was a light sprinkle of rain, but we decided to keep going. Bad move, at 20 feet off the boat the sky opened up and we both got drenched. By the time we had placed our orders (NC style chopped pork and fried chicken) the rain had stopped and it was blue sky again.

Diner was fine and with the great internet connection we got a chance to watch a few shows. After dinner I ran back across to get us ice cream. Having an ice cream place near by is nice, one of the things we’ve liked about the small towns we’ve stayed at on the trip.

My weather planning is holding up, looks like the ride to Elizabeth City will be fine.

Flashback to a year ago, we were still in Newburg NY