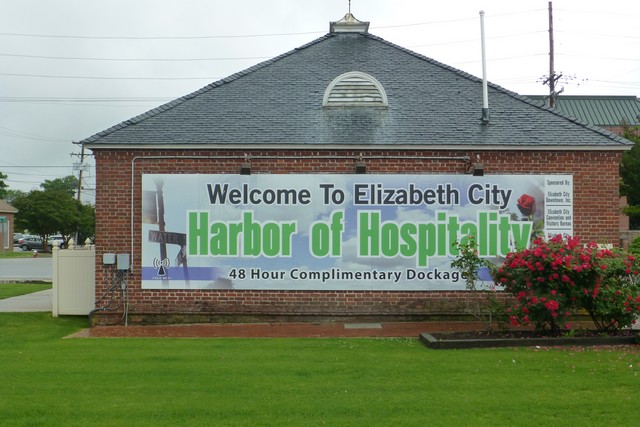 We both slept well last night even with the few spats of rain that we got. The new sealant for the door is working well, but I’ll see once the heavy rain hits.

We were up and off the dock at 6AM as the sun was just rising on the eastern horizon. An 8 knot wind was blowing, just enough to give a mild chop. We motored up the Alligator and into the Albemarle Sound. The eastern end of the sound is Kitty Hawk. If there wasn’t a storm coming we would have gone there, but we have our sights set on Elizabeth City.

With the winds from the east is was a mixed chop until well into the Albemarle then we started getting waves that caused a little roll. Once I was past the shallow southern end I was able to put the waves on the stern. That made for a much smoother ride since the waves were small and I was going with them.

By 8 AM we were in the mouth of the Pasquotank River and back to a moderate chop. Along the river is an airship hanger. According to the interwebs it’s one of eight remaining huge dirigible hangars built by the Navy during WWII.. It is currently used by TCOM, an airship manufacturing company, as manufacturing and test location. The massive corrugated steel on frame structure is 1,040 feet long, 150 feet high and 296 feet wide, constructed before the war effort made steel a limited commodity.

There was even an airship outside. I’m thinking that they will be moving it inside before the end of the day. We got some good pictures that should make it to the picture page.

Just past the airship is the US Coast Guard Airfield. It’s a huge sprawling complex with buildings along the waterfront. I had initially thought it was Elizabeth City, it’s that big.

We got into Elizabeth City around 9:30. The town is known for all the free docks that are available to boaters. Sadly the bigger ones were taken and I didn’t feel good about tying up to the long bulkhead wall. The wind and waves were directly into it, so we would be broadside to that, not a happy place to be. So we went through the lift bridge into much calmer and quieter waters.

There is a dock just past the lift bridge. It’s owned by the Jennette Company and you are free to dock there provided you eat at one of the places they sell food to. We got onto the dock without any problems and Susan got fenders out and we were good to go.

For a walk around the truck parking lot. Since they are not open on Sunday’s, the gate was locked, no way to get out and into the town. So it was back onto the boat, back off the dock and off to Lamb’s marina. They have a loaner car, so we would just drive back.

Thirty-five minutes later we were tied off at Lamb’s. Susan did an extra secure set of ties and put out some extra fenders. We had to wait until 1:30 to get the car, it was out with another set of boaters.

It was a nice bright day, we watched people come in and out of the marina in a wide variety of boats. Rowboats, small skiffs, a pontoon boat with a family out for the day. Even the Coast Guard rescue boat came in for what turned out to be an ice cream run.

Using her skills she had picked out a Mexican place for lunch. We had great food it was an excellent choice. Since it was Mother’s Day Susan got a rose as a gift.

For the last week I’ve been trying to get a haircut, I want to look a little presentable when we “cross our wake”. But from Georgetown until here all the places have been far away or booked all day. So I was excited to find a Hair Cuttery with a zero minute wait only 2 minutes away. 20 minutes later psycho Santa is gone and I look much better.

A quick stop at Lowe’s for some hardware and it was back downtown. We found that most places were closed, but we did stop into Coaster’s, a local brew pub. It’s an interesting setup, you need to be a member to get in, but memberships are only a dollar. We had some great craft brews.

Back at the marina we met the crew of “Abamadream”, they have been on the loop for awhile, they started out on the Ten-tom. They had spent a month in the islands and were on their way to Canada.

Across the evening we got some decent rain, the leading edge of Ana passing us by. We would have rain off and on all night and into the day. We got caught up on some of our TV and both of us made some progress on the website. We are both surprised on how much effort the site is and how much work we will need to do when we get back trying to organize the 1000′s of pictures that we have taken.

In between the cloudbursts we walked down the marina dock. The far end is under 3” of water a sign that we got lots of rain and the SE wind is still pushing water into the area. We rode into Elizabeth City passing other marina’s with some level of flooding. Downtown wasn’t as bad, but there were sections of roads that had over an 1” of water, it made driving a little scary.

We had a great Japanese lunch and then hit the waterfront to check out the docks. The wind and waves were down, we would have been able to get a boat in today.

I was disappointed to find that the museum is also closed on Mondays, so we’ ve missed out on that. But we did get to the post office to get packages and letters mailed off.

Back on the boat the rains continued. So we both had extended naps to help recharge.

Dinner was simple, dirty rice. It’s one of my favorites and it takes no time to make.

Watching the weather looks like a pretty good day coming up, calm winds but highs in the upper 80′s so it will be interesting inside the Dismal Swamp.

A year ago we were in Kingston and Connlley NY on the hudson. http://qvmarine.com/great-loop/kingston-and-connelley-on-the-hudson/