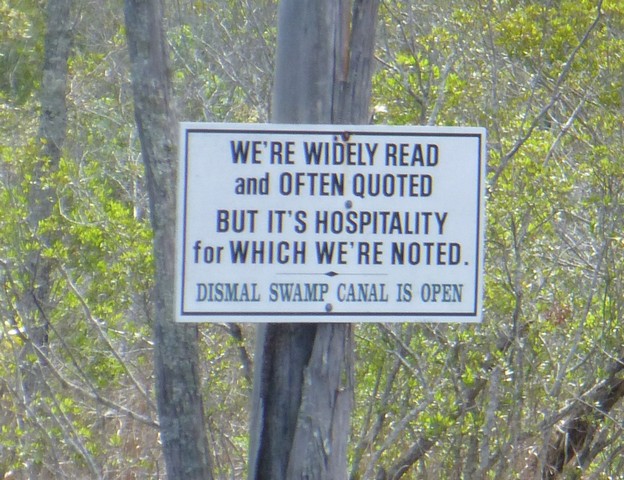 Out of Lamb’s Marina today at 8:30. Mr Lamb, the owner was nice enough to help us off with our lines. It really is a great marina, very happy that we decided to stay.

We went up the river with “Abamadream”. It’s pretty much no wake the entire 17 miles so it took some time. Fuel mileage was great I burned 1.2 gallons on the entire trip. We saw lots of snakes and turtles and birds on the way. The river and canal segments are close in, so when when there is traffic the other way it’s a squeeze.

The river is constant set of curves and twists. For most of the time we could not see the boat behind us. With the narrow passages it was very different that what we’ve seen before. The long straight run of canal was even more narrow, the feeling you are driving down a single track lane in the woods.

Did another lock, we are down to the last hand full. It was pretty easy, only a rise of about 10′. It didn’t take long, the only disconcerting thing was the brown water rushing into the lock. The tannin filled water here is pretty unusual. There is a lift bridge just after it, we slid quietly by the traffic.

There are three of us tied off at the visitor center wall. It’s 150, and all of us pretty much fill it.

Nice park, very nice center. The center talks about the early days of the swam with people like George Washington building an early canal in Virginia to make it easier to harvest the trees. In the 1805 the existing canal was completed, allowing traffic from Virginia into North Carolina. (The center sits a few miles south of the states border). In the 1800′s it saw lots of use. As the lumber business died off in the 1900′s the use fell. The last lumber harvest happened in 1960. Since then the water has been for boating, canoes, etc.

Susan and I walked around and saw a snake on the swamp walk and two turtles. There were supposed to be frogs, but we had to settle for small lizards. The crew of “Abamadream” saw a fawn with it’s mother. All of us collected ticks (uggg) I’ll most likely feel them all night crawling on me.

After a woods walk and touring the really nice display in the visitors center about the canal and the history of the swamp, Susan did a nap and I sat out under a shady tree to read a book. Ah the joys of paper books!

The three boats got together for docktails which was nice. Dinner was my favorite!

Other than the heat this is a nice place, there is to be some rain and temps will drop into the mid 60′s which will make sleeping easier. At this point I have the AC running off the generator so we are cool and happy.

The next few days are better weather as we set to go up the Potomac River. Yes we are stalling some before going home, but we would never be able to do the Potomac trip from the Bohemia River. (It takes 4 days to get to the mouth and another 4 to get home, that would leave only 6 days to do the 100 mile length of the river.

A year ago we were at the Shady Harbor Marina in New Baltimore NY. Where we found out that marina food didn’t need to be fried.