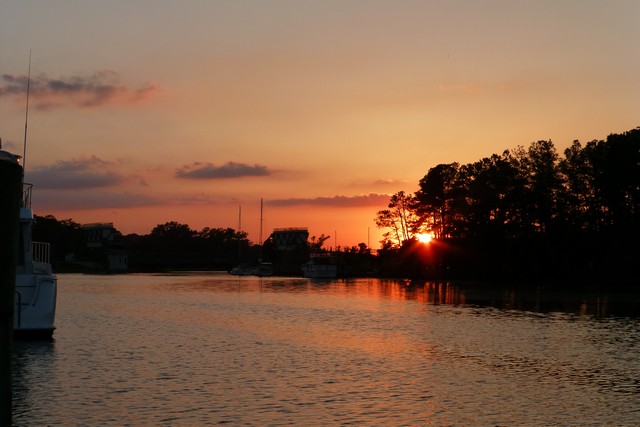 So after the 90 degree yesterday in the Dismal Swamp, we woke to a 65 degree morning. I was happy it had cooled down and it made the mosquitoes die off. Flashback to the slaves that dug this by hand, not a happy time. We putzed around the boat and then at 8 AM pushed off into the channel.

It’s a 15 mile ride to the bridge and lock, and the Quo Vadimus idles at 6. So I took a tip from my friend Doug and just used the port engine for the three hours at just above idle and we were good.

So since you asked, we go slow since 1) the canal is about 40′ wide 2) there is a ton of material at the bottom and it sometimes surfaces you go past fast. There are two boats following us so I didn’t want stuff up in the water for them to hit. 3) There was rain / storm last night, so there is stuff for me to move around, but not lots of room to do it in. So it was slow, slow, watch the turtles and the snakes and the birds and life in the 1800′s drift by.

We got to the bridge right at 11AM in time for the opening. The bridge/lock master was really nice, the three of us passed through and got into the lock in short order. He had lots of good tips on places to go, anchor and eat. I noticed that he didn’t work for the Army Corps of Engineers, but for an outside service company. Wonder if they are outsourcing the lock work, but he said he had been there for 20 years.

We got out of the lock and did 8 miles to our next to last lock on this trip, Great Bridge. We locked through tied up about ½ down the lock. There is a nesting goose at the south end and boats make them cranky. This was the nicest lock on our trip with brand new rubber sides, we really didn’t need our fenders. We will pass through this lock on Friday and we are officially done with locks on the loop. Yay Us!.

Under the Great Bridge Draw Bridge and into Atlantic Yacht Basin. The Quo Vadimus was purchased here in 2011, so she has “crossed her wake”, but our official crossing won’t be until we get to the Bohemia River. We are stopping here for the great fuel prices at $2.40 a gallon. This is less than ½ price of what I paid in Rochester almost a year ago and $3 less a gallon than my top price in Canada.

Docking here is also cheap at $1 per foot, there have been few places along the trip this cheap.

I stopped in to see our broker, Bob, at Virginia Yacht Brokers. He said we could sell Quo Vadimus now and quickly, but said if we were still boating and having fun keep on going. He has sent a few future Loopers to us in the past to help with Looping questions.

We had a visit from a future Looper that has purchased a 4788 to start their loop next year. We passed along all of our Looper tips. (Go now, have fun, don’t listen to other Loopers on where to go make it your own adventure, but spend as much time in Canada as you can!) [irony]

While at the dock we watched a huge parade of boats from 20′ day cruisers to 70′ yachts. There were two RIB boats with marinnes and a support boat. After 6 the crew boats come out there have been two 8 man and one 4 man shell one the water. This is a really great place to watch boats come and go.

Susan made a great dinner that starred corn on the cob. It’s cool that local vegatables are coming into season, and yes this corn was from Florida, but as of 4 weeks ago that was “local”.

We are coming off the river system so stuff like winds and tides are making a difference again. The Thursday forecast is for winds from the north. That means that the wind starts at our home in the Upper Chesapeake and drags water down so by the time it reaches us waves are 3-4′ (or more). No trip north for Thursday.

Sleeping in was easy since it had cooled down again. We both got caught up on computer stuff (hey new title pictures!) and some other odds and ends. I happened to see a carpet cleaning company working on the mega yacht behind us and we asked how much to do our boat. Not much it turned out and we now have bright clean carpet. Yay us!!

Lunch was at a Japanese buffet that you order off the menu. Which would be more of a prix fixe, or table d’hôte, but those are more of a fixed menu. We had the run of the menu, but limits on some items. None the less we stuffed ourselves and waddled out an hour later. My big treat was Hershey’s Ice Cream in a small cup. We had the cups as kids and my children had them as kids, it’s really great ice cream.

Did naps in the afternoon and watched boats go by until baked chicken dinner. It’s amazing how good a simple baked chicken can taste.

After dinner I spoke to one boat, it’s a refit oyster buy boat, but now it’s a cruiser with the oyster spaces turned into nice cabins. I also saw the “Active Captain Boat”, so they made their goal of Norfolk.

Did a little engine work for the rest of the trip. I can’t get to the sensor without crawling into the engine, so that will wait for the weekend. The belts on the new alternator were loose so they got tightened up. Checked all the fluids and we are ready to roll.