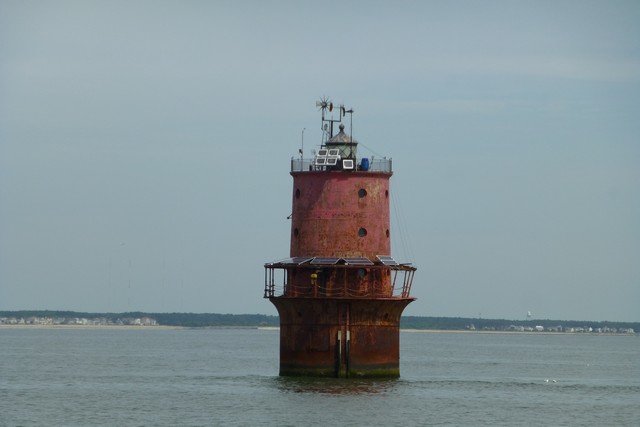 Excitement is in the air. We are recreating the maiden voyage of the “Quo Vadimus” from May, 2011. We’ve spent the last two days at Atlantic Yacht Basin, yesterday was pretty much goofing off.

Today we were off the dock at 6:45 AM. Once again one of those wispy fog mornings. We made the 7AM Great Bridge Lift Bridge opening. We slid into the Great Bridge Lock at 7:10 past the squawking geese (nesting pair at the end of the lock). We rose 18” and like our very first lock in 2011 our last lock of the Great Loop is over, no muss, no fuss.

We took it easy during the first two hours. Since the “Steel Bridge” is gone, there wasn’t anything to time for. We almost got hung up at one of of the rail road bridges, but the tender called out that I should pick up the pace and we passed under with lots of time to spare.

The Navy Yards were abuzz with a carrier and 4 warships coming into port. Lots of chatter and lots of requests by the Navy ships for people to get out of their way. I’m always amazed that people don’t pay attention and won’t move fast enough to get out of the way. It’s not like they could easily stop.

We were in the bay proper by Thimble Shoals by 11AM. We were happy that we waited out the weather from yesterday. Today we had 10 knot south winds kicking up a minor swell on our stern as we headed north.

This section reminds me how big the Chesapeake Bay is in the Virginia end. You can’t see the Eastern Shore and after awhile there is only water to the South and North.

Througout the day the winds picked up so when we turned into the Rappahannock the waves were 1-2′. We needed to angle off to get into the river so it was a little rolly for awhile. We got into Norview Marina to get pumped out. While there we talked to “Field Trip”. They had come up yesterday with the north winds and said that it was not a fun time.

Our slip was next to a custom 57 power cat. The owner told us all about it, it sounded like a great boat. He has the same problem most of us do, people say “wow, I want to come down and ride, but they never actually show up. He’s downsizing to a 45 power cat, I asked if he wanted to take a 45 Bayliner in trade and he said that he was a multi-hull sailor, no mono-hull for him.

But our little 8 hour 45 minute voyage of 62 nautical miles left us pretty beat. So Susan grilled pork chops and we were both in bed by 8:30. But it was a great day, we recounted the fun trip that we had with Dennis bringing the Quo Vadimus home for the first time. Ir was also great to have completed the last lock, 105 in total.