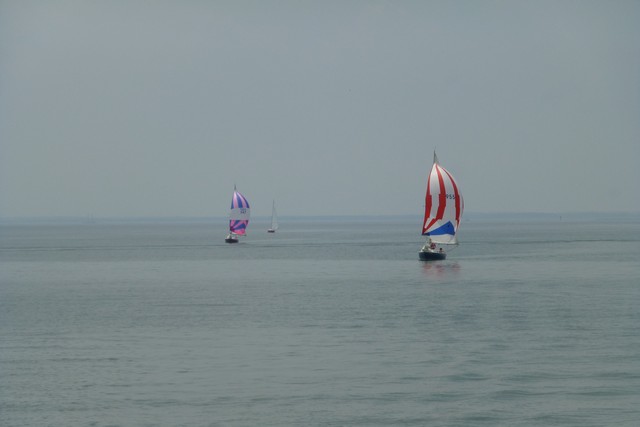 Another early start, today because we wanted to tour St. Mary’s Maryland.

The good news was the winds were from the South, so we would have following seas for the trip North. But the winds were up so there would be 2 foot waves the entire trip. Saying that the trip out into the bay took longer since I needed to go South some (waves on the starboard quarter) vs full abeam. Once out in the bay I could head north and put them on the stern.

While there was some sailboats out the only other traffic was a small container ship and two tows. One was pushing their barge (with lots of bow waves crashing over it). The second was actually towing the barge. This is the first time I’d seen an actual “tow” since we we left last April. It had to be hard for him to keep the line from taking up slack as they traveled over the waves.

St. Mary’s Maryland is one of the earliest settlements in Maryland and is where the first capital was. In 1634 Lord Calvert and 140 settlers plus crew to set up the first English settlement. The Dove was their scout boat, all of the families were aboard the much larger Ark.

A replica of the Dove is anchored outside the recreation of the town of St. Mary’s. We sat just outside the dock and got some great pictures. From there we went around the corner to St. Mary’s College and docked at their wharf. Graduation had just ended so there were lots of families taking pictures of their children. Wonder how many shots the “Quo Vadimus” is in? Talk about a photo bomb!

We walked through the very pretty campus into St Mary’s. There is a recreation of some of the original buildings. A few are on the former site and there is sections of the floor that are cut away so you can see the original basement floors (mostly brick). They have also set up the frames of a few other buildings so it’s easy to see what they looked like. St Mary’s reminded both of us of Fayette MI, the steel town that was abandoned in the 1800′s. They still have the frames of some of the buildings up so you can sort of visualize what it would have looked like.

One of the things I found interesting is that the fireplaces are in the center of the house so it heats from the center out. The chimney is more of a trapezoid type shape, so it was easy for the 1630′s settlers to build without them falling over.

We did a quick tour of the Dove. The mate said that there was no recreation of the Ark, it would take millions to build it and maintenance would be a problem. They did a demo of the “salute gun” that they used to signal to the other boat.

We walked back through the campus and made a quick stop at the coffee shop for a snack. Frozen microwave food is just the pits. But with most of the students gone it made sense to not have the cafeteria open.

We got back on the boat. There was one Gold Looper anchored out in Horseshoe Bay, but we couldn’t get the name of the boat. We cruised back up the St Mary’s and turned into our marina at Dennis Point. There is a huge fish tournament here, so we will take our time getting off the dock in the morning.

We got some gusty rain so I needed to run out and furl the Looper flag. When it rattles it sounds like the entire bow is coming apart. Likewise Susan adjusted the fenders to keep them from slapping around like a freshly boated fish.

We’ll do two slow days up the river and then spend some time in Alexandria VA. Next stop is Colonial Beach.

One year ago today we were starting our five day stay in Ilion NY Like here it rained, but unlike here it where it rained only an hour in Ilion it rained 2 days in a row and flooded the Erie Canal. Once the Canal was closed we had to spend the days in Ilion until it opened up again.