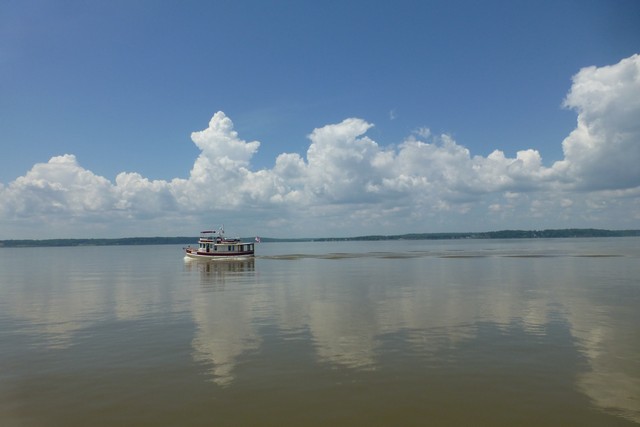 Today was forecast to be hot and it was, mid day temps went to 85, and there wasn’t much wind. But first things first.

We got up and had a slow morning. The last few days have had us up and going pretty early, so it was nice to hang on the dock a little while. We pushed off about 8 AM into the very still water. We swung around into the Potomac on a wide lazy arc to miss the shoaling at the tip of Colonial Beach.

Coming into the river we were soon approaching the Navy test fire range. A VHF radio call to the range officer on “Range Boat 3” confirmed that the range was active and we should move over and stay along the Maryland shoreline. We did that and facing an oncoming tide slowly worked our way up the river. And when I say slowly it was just that. Our normal cruise speed is engine RPM of 1,800-1,900 RPM and we go 8.1 to 8.4 knots. With the engine at 1,900 we poked along at 6.9 knots.

Based on our speed we knew it was going to be a long ride. But it is a very pretty one the Potomac has some good vistas.

Along the way we passed a government site with some big radar / satellite dishes, the world famous Quantico Marine Base, a really neat power line spanning the river and some amazing homes.

We turned up into the Occoquan River and headed up the very narrow channel. I had not thought the current would be so bad, so we were almost two hours later than planned. So we were at dead low tide, and showed about 4-5′ under the keel the entire way.

We got tied off and while we were checking emails, etc., there was a short cloud burst that went by. We were hoping for cooler air, but instead we got more humidity. There were rain bands to the west, it wasn’t clear if we would see them or not.

Dinner was at the marina restaurant, we did our appetizer selections and sat back to watch the view and enjoy our food.

When we got back to the boat the crews of “The Chief”, “Para’Dice”, and “Lady Min” were doing docktails. We joined in and got good tips on where to go and what to see across the next few days. The crew of “Para’Dice” is in the planning stages of their Looper adventure, so we talked some about our trip.

The rain bands that may or may not arrive and did so with a vengeance. The skys opened up and it just poured. (There was a ton of sticks and stuff in the water the next morning). When the rain quit I had a short chat with the Captain of “Para’Dice”, he had a few more questions.

On the plus side it looks like the new weather stripping on the upper helm door is working well. We’ll keep a towel there just as a safety measure but there was no moisture from last night.

Flashback: One year ago we were still in Ilion, NY, working our way through the Voss’ Menu (we are now regulars, after 5 days everyone knows our name)

One thought on “Occoquan, VA”