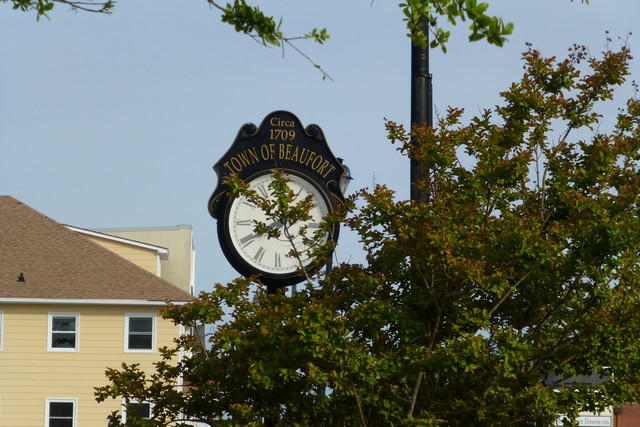 We woke to one of those wispy fog mornings where you can see pretty well, but the tendrils of fog are all around. The wind overnight had gone and the marina basin was very calm.

We met up with the crew of Seahorse and pushed them off the dock at 6:15 with the sun rising behind us. While he backed out of the marina we got started up, spun off the dock and were following them up river. Destination the Onslow Bridge.

The bridge is at the entrance to the Marine Base and is owned and operated by the Marine Corps. Openings are on the hour and half hour. We were told at the Southport briefing when the operator says 0700, he does not mean 0701. OohRah!

With Seahorse in the lead and a tidal push we were on track to make the bridge opening on time. But there was a dredge barge and it’s tow in front of us, that would mean passing the tow. I called the bridge operator. He explained that we needed to be there at 0700. I said it would be better if we followed the commercial tow. He explained that he wanted us there at 0700. I say that was fine, but there would mean either two openings, one for us and one for the tow, or a very long opening while he waited for the tow. I said it would be less inconvenient to the base personnel if we just tucked in behind the tow. That did the trick!

We fell in behind the tow and cruised through the bridge at 7:10AM OohRah!

As the fog burned away we cruised along helped by the tidal current. It’s really nice to get that extra 1.2 knots of speed to help reduce the trip time.

Another great day with perfect weather, flat water and lots to look at. Some really nice homes and visits by dolphins made the day fly by.

Oh and flying by were Looper friends on “Plane2Sea”, they were also headed into Beaufort for the day.

As we entered into the Beaufort area we saw USN Warship #24 on the horizon. They had come into port earlier in the day with the help of the Coast Guard (moving fishing boats out of the way). It’s amazing how the new era of Navy ships look compared to the ones from the 70′s. The USS Arlington is an “amphibious transport dock” or to us a mobile dry dock. Because it has to hold a boat inside, the superstructure of the Arlington is very high and has pretty flat sides. The entire boat is a series of hard angles blending in to keep the radar profile flat.

As we came around the corner there were about a hundred fishing boats. If the Coast Guard had problems moving them for a warship, they were not about to move for us. Since it was such a great day and we were early we picked our way through them.

With the big help from the tide and the early start we covered 40 miles in just about 5 hours.

We tied up at the Beaufort City Docks just before noon and helped Seahorse tie up behind us. We both had leftovers waiting and set up to meet at docktails. Our lunch was ½ of an avocado filled with shrimp salad. Yum!!!

After lunch Susan wanted to do laundry and nap, so I loaded up First Mate Pig and headed off to see Beaufort. The downtown area is pretty small, about 8 blocks from end to end and about 5 blocks deep.

Lots of cool small shops selling everything from ice cream to expensive art and antiques. About 4 blocks down was the Maritime museum. It had lots of good displays, Beaufort played a significant part in the Civil War.

Across the street is the yard for the Maritime Museum. They do some restoration, but mostly are building wooden boats as displays on how things used to be done. We had missed the Watercraft Weekend by a few days. Part of it is giving teams materials to make flat bottomed skiffs and a 4 hour time window to build them in. This year they built a dozen boats and by the end of build time there were all “mostly floating”. Sounds like something that would be fun.

In my quest for North Carolina brews continued. I went to the Backstreet Pub and the bartender was nice enough to set me up with a flight of three beers she had on tap. On the other side of the street, at Clawson’s I was able to have 4 more. I’m still on the hunt to find Wooden Robot Beer from Charlotte, North Carolina.

At Docktails we met up with “Seahorse” and “Plane2sea”. We were joined by new Loopers on “Snow Goose”. We sat and shared stories for awhile until sunset came.

Susan and I ended up our night watching one of the last episodes of Mad Men. It’s really nice to have great wifi.

Another great day on the Loop. This is our 6th day in a row of sailing, we will go one more day since the weather is so nice and then have a break day.

(Flashback, one year ago today we were in New York City)