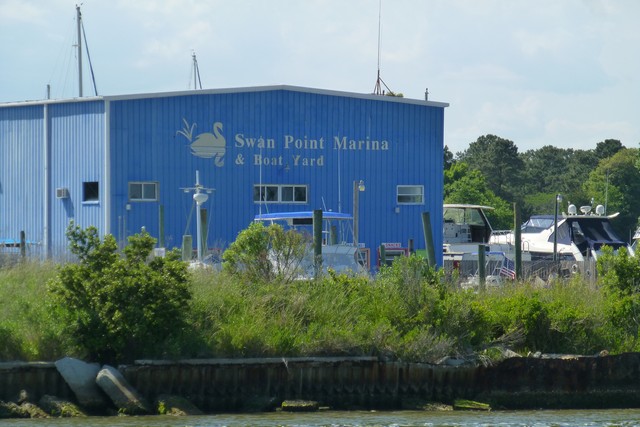 I did some engine maintenance this morning, filter changes all around and topping of the oil. This should hold us until we get to Norfolk and I’ll get the oil changed.

We got off the dock at 8, a little behind my desired 7:30 start. But we had the tide with us and were soon ripping up the river.

There were a few bridges today that we needed to time the arrivals at. We caught up to our friends on Seahorse and they led the way. The Captain did a great job of having us “arrive” about 10 mins early, we then slowed down about 2 miles out and worked our way to the bridge. Lots of people would go slower the entire trip, but I’ve run into problems where there is an unexpected “no wake zone” that goes on for miles.

Just before the Wrightsville Bridge we got rocked and the iPad mount came free. It managed to slide down the front of the DC panel tripping the main breaker. The engines kept running since it’s all mechanical, but the loss of the radio and the gauges took me by surprise. I was able to figure it out pretty quickly and we were back in business.

Like most of North Carolina so far this section was a mix of residential areas and wilderness. It has more variety of scenery going on, but it’s still pretty flat areas. There were lots of people fishing and when the tide fell we saw people out raking clams.

We pulled into the Swan’s Point Marina S in Sneads Ferry, NC. ,and almost crashed the boat in the current. We were moving with the tide and when we turned broadside to the current the flow really grabbed the boat and kept us moving down stream. The entrance is marked by sets of piles and a breakwater, I just made it through. (We sent a heads up to the Seahorse, he went past the marina and turned up into the current so he wasn’t swept down).

Soon both boats were tied up. Swans Point Marina is a family run place, lots of local boaters that were very friendly. They have ties to the town of Sneads Ferry and the major place to eat there, the Riverview. We arraigned a ride and the owner came out to get us. It reminded Susan of the time we stayed in Oxford and they sent someone to pick us up from the restaurant.

The Riverview was great, they brought us warm hushpuppies and I ordered the fried spicy pickles. They are much better than the fried dill slices we’ve had before. Susan had the steak and I had two boneless pork chops. [Side story: We had dinner at Patti's in Green Turtle Bay and they serve a 2” pork chop that was the best pork chop I've ever had. I've not been getting them out to eat much since they are never near as good. The ones tonight are now second on my list. I have one leftover, there is a great lunch in my future.]

We took pie home since we were stuffed. The crew from Seahorse gave it high marks when we talked to them the next morning.

We got back to the boat with a plan to leave early the next morning, we wanted to make the next bridge opening at 7AM. Even though this was a long day at 7.7 hours on the water, the beautiful day, the smooth ride and the great dinner made it one of the highlights. Stickers all around!