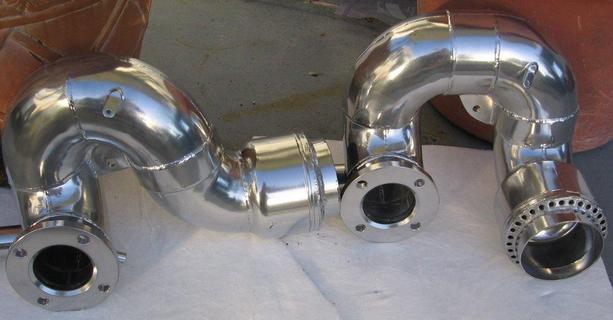 One of the features of owning a 20+ year old boat is that you can get it for a reasonable price.  One of the problems is that there are 20 year old items that need to be repaired or replaced.

The propulsion system of the Quo Vadimus is twin 250HP Hino engines.  They are very similar to what you would find in a Japanese truck.  The biggest difference is how they are cooled.  In a boat we suck raw water from under the boat.  It then goes through a radiator that is called a Manicooler.  It is a 4″ brass tube that has about 20 1/4″ smaller tubes on the inside.   Raw sea water passes through the big tube, swirling around the smaller tubes cooling them.

The raw water continues into the metal devices shown above, they are called risers.  The hot exhaust from the cylinders comes into the big openings.  The water swirls around the outside cooling the exhaust. At the very end of the riser, the water is mixed with the exhaust gases to cool them even more, the final temperature is about 15 degrees higher than when it started.

The exhaust / water mixture then travels down a 8″ tube to the rear of the boat and is dumped overboard.   The water cooling allows the exhaust to travel through the aft compartment without burning anything.

The original risers were made of cast iron and were beginning to clog with sediment and had tinges of rust.   While they would have lasted another year, it was a good time to replace them.

So in 2013, we opted to take the exhaust out, clean the manicoolers, pressure test all the tubes and then powder coat the insides to reduce corrosion.   Earl, our Hino engine guru, had the two risers show above custom made.   The one on the port (left hand side) engine used to go at a diagonal across  the center of the lazarette, really taking up a lot of space.  The new one runs the exhaust hose across the back of the engine and then along the hull.  This freed up a ton of storage space.

And while Earl had everything opened up, he checked the adjustment of the valves to make sure things would run smoothly.   So at this point we are all set with major engine work.   I will need to do the easy things like oil and filter changes every 100 hours, etc.