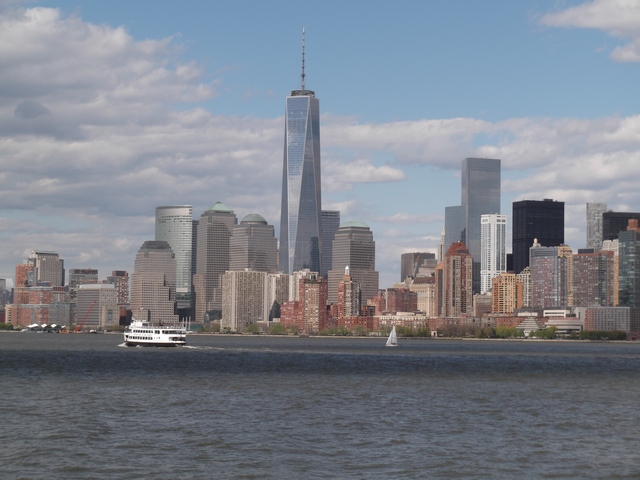 Our goal is New York, NY! Pretty excited about driving up the harbor past the Statue of Liberty!

But first, out of Manasquan and north. A very uneventful trip, water was once again flat and calm. Love that autopilot. We arrived 3 hours later at the Ambrose Channel. Happily there was a freighter 5 miles ahead, and nothing astern so we could take our time and not be in anyones way.

On the way we saw this interesting barge. It has what I think are three legs and a work bay. Not quite sure what it is used for. 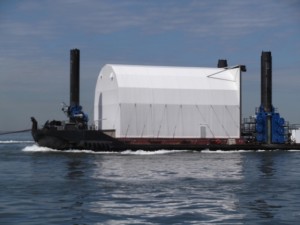 We got caught in some pretty swirly currents, slowing our speed and also pushing the boat direction around. It’s caused by the currents from the Hudson River dumping into the Atlantic. Soon we were passing under the Verrazano–Narrows Bridge. I have been over this bridge many times, but it’s more impressive going under it. It is HUGE!!! Once we were past the bridge, the current was less and we were able to keep our course.

Next up was passing the Statue of Liberty. We came as close as the exclusion area would allow and Susan got some great shots. About 20 minutes later we were docking at Liberty Landing Marina, home port for another night!

We closed up the boat and headed for the Ellis Island Ferry. Once aboard we were quickly taken and deposited on Ellis Island. It is a pretty amazing setup, but sadly most of the exhibits on the second and third floor were closed. (When Sandy hit, the basement with all the power was flooded, so they lost all of their environmental systems to keep the artifacts safe). I was impressed with how many people came through there and what an ordeal the trip must have been. I’ll never whine about the customs line at JFK again.

There is a large exhibit on the expansion of the US and how we displaced the native Indians. They graphically display the millions moved and sadly the hundreds of thousands that died in the process.

We then boarded another ferry for the Statue of Liberty. Susan wanted to see the Statue close up, and the ferry ride took care of that. So we hopped onto another ferry and headed across the river to Battery Park.

We walked about 10 blocks to an MTA station to find that we wouldn’t be able to take those trains to Chinatown. So we went back upstairs and got a taxi (Susan has amazing Taxi karma!) to take us to Chinatown.

Our goal was “Soup Dumplings” or Xiao Long Bao that she had read about. They are a dumpling with pork and a liquid broth inside. Look for her food post for details.

After dinner it was a taxi back to a ferry landing and then a short ride across the river to Liberty Landing Marina. We were home after a long but exciting day.

The next morning we did laundry and I worked on the oil pressure gauge (my fix didn’t work) and the port tachometer (which I did fix, there was a bad connection).

At 11AM with laundry done we slid out of our berth and headed north up the Hudson to explore the great north. If we only had beaver hats to wear!

2 thoughts on “The Big Apple”