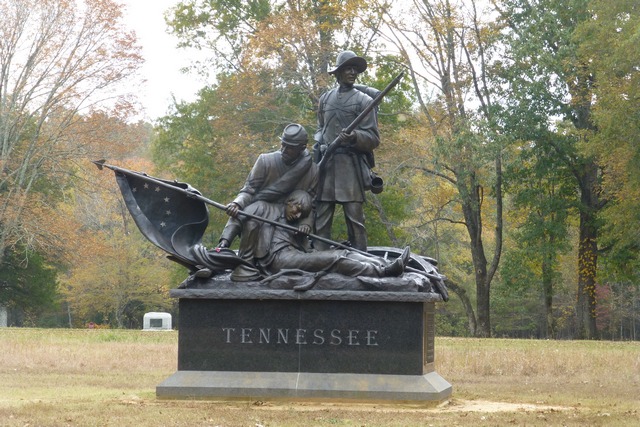 Today’s field trip was to the Shilo Battlefield. We got the marina van and with the Captain of Ithaka at the wheel drove out to the site.

The battle of Shilo was early in the Civil war and took place across two days, April 6 and 7th 1862. There were almost 100,000 men involved and at the end of the two days there were over 23,000 casualties, 2500 of them were men that were killed. The entire battle takes place in an area about a 9 square mile area, and it is the bloodiest to that date in the war.

We got to the visitors center which is closed for renovations. They do have a tent set up so you can watch a movie that has the main details of the battle. The movie was good in outlining the troop movements and very good in describing the casualties. It also gave a sense what it was like to be a soldier then. Many of the troops had come from Ohio, Tennessee and Illinois, most of the way on foot. Living conditions were not what you called great.

Outside the theater is the cemetery where the Union soldiers are buried. They are in neat rows organized by the states and battalions they were part of. Many of the graves just have a number on them.

There is a driving tour that winds around the park and the 100′s of monuments that are in it. One of the first stops is one of the three mass graves that contain the remains of the Confederate soldiers. There is just a simple marker, no names, just identifying it as a mass grave. Since the battle was a Union “victory”, there was no need to do anything special with the defeated army’s bodies.

On the tour are markers that show the troop movements on both sides during the two days. If you are a battle buff, you can see exactly where troops were deployed and what they were fighting in.

There are also cannons from the war shown in place. At one point the Confederate Army set up a line of 50+ cannons to lob into the Union front lines. They fired into an area called the “Hornets Nest” for over 7 hours before the Union soldiers in the field surrendered. Replicas have been installed along that line so you can visualize the barrage. The cannon crews were able to reload and fire on fairly fast basis, overall they were able to fire 2-3 shots a second.

Lots and lots of CSA statues and an equal number of USA statues. There is pretty much one for each regiment that participated in the war.

The Parks department did a great job on the site, it’s easy to visualize how horrific the entire event was. Overall it’s very depressing when you look at the number of men and boys killed. The really sad part that even after such a debacle, the war continued on for 3 more years.

The ride home was pretty somber, the three of us were kind of lost in though about what we had seen. For Susan and I, we will pass on the other Civil war sites, they are not scenes of great battles, but more monuments to how stupid humans are.