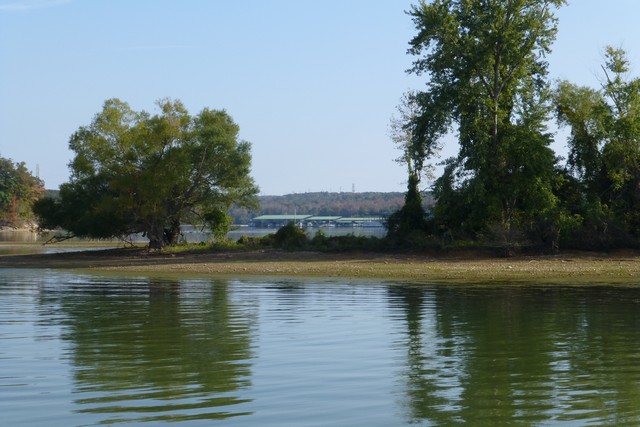 Last night at the Paris Landing State Park Marina was a tower that showed the water depth. As I posted before, the water depth is at the winter pool level, about 5 feet below the summer level. We really started to notice it as we went farther down the river.

We saw houses with docks that ended about the summer pool level, about 5′ above the water level. I’m not sure when the level drops, but it looks like it ends lots of people’s summer boating.

Because we had gone a little farther yesterday, we were taking it easy today. Susan suggested pulling into one of the coves that we can see, anchor and have lunch. Great idea.

Dug into the Tennessee River charts and the Skipper Bob’s guide. Little Crooked Creek seemed to be ideal. So we setup and approached. When the water got to be under 5′ deep and we were still pretty far from shore we backed out. Looks like a combination of more shoaling and the winter pool were going to keep us out.

We headed a little farther to Harmon Creek. We had seen a fish boat zoom in, plus there were markers. We followed the channel in about a mile and anchored in a deep corner. We had 10 feet of water below the keel, a good place to go.

We had a nice lunch and Susan gave a try at fishing. She could see fish jumping about 40 feet away so she knew fish were there. There were also about 5 fishing boats that came in, made a few casts and gave up.

About this time we saw our friends on Toba glide by on the river. They are pretty distinctive with the blue boat and the orange dink on the stern. I tried hailing them on the radio, but wasn’t able to connect. Maybe we would see them down the river.

After an hour Susan gave up. She had been through her collection of lures with only one nibble. So we picked up the anchor and picked our way slowly out of the channel.

About 3 PM we saw the sign for Pebble Isle Marina and started in. I had targeted what I thought were the entrance markers and slowly headed towards them. Watching the depth gauge undwind from 45′ to 3′, I knew I had turned too early. Backing out slowly to deeper water. There, farther down the channel was another marker. Carefully rounding it, I found 12′ of water and headed up to the fuel dock.

We purchased 190 gallons of fuel, we had used it to come the 335 miles from Grafton to here. Not bad 1.7 miles to the gallon. The currents on the Mississippi had helped along with taking it slow.

Waiting at the dock were our friends from Toba. We set up to meet them for Docktails later on.

I’ve been battling a dirty fuel problem since we crossed into Canada (I’m blaming it on the fuel we got at the Port of Rochester). The filters have these cool little gauges on them that tell when they need to be changed. The starboard side has needed to be changed more often. When I checked, the port one was ready the starboard side was about ¾ clogged. I decided to change both since I was down there. I’m getting much better at changing them and I’m down to where I’m not spilling fuel all over the bilge and myself.

Docktails with the crew of Toba was fun. We’ve been crossing their path lots on the trip. They had gone the Saturday we were in Pennsylvania to Nashville. We had cheated and gone by car, but had seen the city docks that they used. We swapped stories about what each crew had seen in Nashville.

With the sun down, the temperature dropped pretty quickly and after about an hour of chatting we headed inside. Susan had made zucchini noodles with sauce for dinner, it was great!

A strange day, we started off wearing long pants and coats, switched to shorts and ran the AC when we got to the dock, back to long pants and coats for Docktails and as we climbed into bed made sure both heaters were running. It’s supposed to go into the 70′s on Sunday and even warmer on Monday.