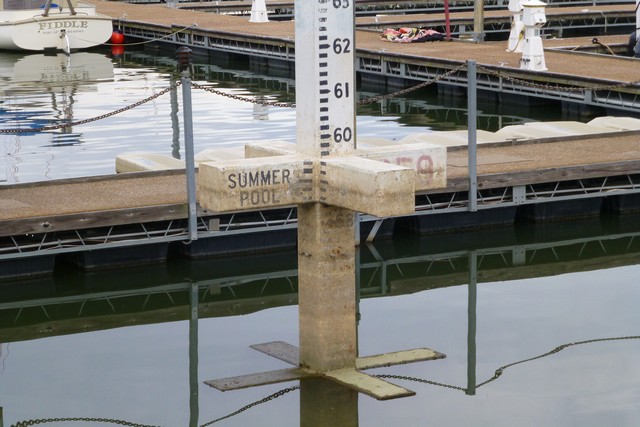 We got off to a slow start this morning, I had some paperwork that I wanted to get done while we had a good Wifi signal. The day was a little chilly but clear we we finally pushed off the dock around 10 AM.

We did just a few miles down Barkley Lake. It has lots of little cranny and coves, its a place that looks like you could easily spend a few summers exploring. It’s connected to Kentucky Lake via a 2 mile canal. Like Barkley, the Kentucky Lake has lots and lots of places to go and hang out.

We headed “upriver” in a “South” direction on the Tennessee river. The Tennessee is a very long river starting well east of Chattanooga. It flows north (one of the few rivers that does) and ends up flowing into the Ohio River and then down to the Mississippi River. Our next few days will be upriver, we will be fighting a slight current until we get past Pickwick Lake.

I’ve taken other Loopers to task about blowing by Canada, I expect to take some about our trip on the Tennessee. There was a ton to do on the “Land Between the Lakes” that we missed out on. We should have kept the car for an extra few days and gone exploring. The nice thing is it really not that far from home, we can get set up with a cottage rental and a small fish boat to go exploring.

While the temperatures have dropped, but the color of the trees has just started to change. While we were rewarded with brilliant colors in West Virginia, western Maryland and parts of Pennsylvania the show here won’t be for another few weeks.

There were lots of fishing boats out for a Thursday, we made an effort to not swamp them as we went by. Not sure if there was lots of catching going on, we saw them sit for about 15 minutes and then it was up hook and off to the next location.

As the day went on the clouds started coming in. The forecast was for nice weather, and our plan was to anchor out. With the change in the weather and me not feeling 100% I opted to go slightly farther than our planned cove and spend the night a marina.

The trip down the river was pretty uneventful, and we got to the Paris Landing State Park marina without issue. The marina is part of a Tennessee State Park and it once we saw it, it’s more of a resort than what you would consider a state park. The marina looked like it had space for about 500 boats. There is a great little store that stocks parts, snacks, etc. Services at the dock were great, the Wi-fi was super fast which was a bonus.

The overall level of this river section and the Kentucky Lake is being controlled by combination of the rain water that falls and the water from Pickwick Dam (water in) and the Barkley / Kentucky Dam (water out). At the base of the dock is a tower that has three crosses on it (there is a picture as the cover shot). The upper cross is the height of the dam at Pickwick Landing. About 55 feet below that is a cross. This is the “summer pool height. This is the level that they attempt to keep the water at all summer after the spring rains. The cross below that is about 5 feet down and that is the winter pool. We asked and got told that the worst it had been was in 2009 and 2010 when the water level rose 20′ above the summer pool depth. The water was up over the retaining wall and well into the parking lot.

Across the highway is a three story hotel with a conference center and restaurant attached to it. It had been recommended to us when we docked. If you call the rangers they will take you back and forth. It’s about 1.5 miles, but it’s across a major highway, they would rather take you than scrape you up later on.

The restaurant had a buffet gong and we made it in the door as early birds, so we got it for $7,95, a deal! The buffet had yellow squash casserole with carrots, onions and cheese covered with canned onion rings; white beans and ham, mashed potatoes, pork chops in gravy, fried catfish, corn bread, hush puppies, a nice salad bar along with cobblers and pies for dessert. As they say good Southern Cooking!

At the gift shop Susan picked up some cookbooks as presents. Quick trip with the Ranger across to our boat slip and we were settled in by 7:30 PM.

We’ve both noticed how early it’s getting to be dark, the days are noticeably shorter. I’m hoping as we head south and into Florida that we will keep some sunlight. Once we get into the Florida part of the trip we will be doing 4 hour days so that will be easy to manage in the daylight.