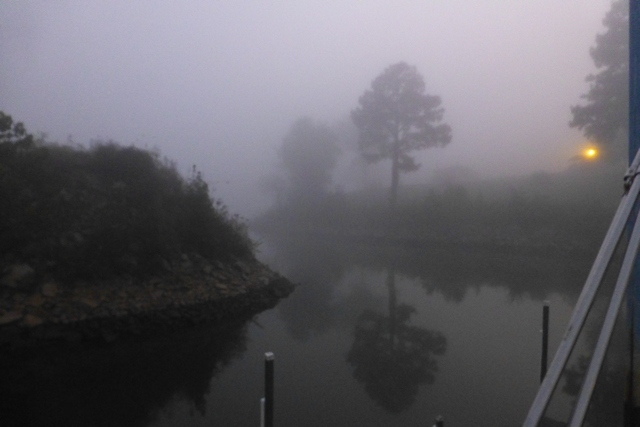 Cold, cold night so there was lots of wet deck today. Plus a ton of moisture on the inside of the windows. Neither one of us slept well. Susan’s shoulder has been bothering her. We had been taking so much about anchoring out that I went into anchor mode getting up every hour.

We had been told about cinnamon buns for breakfast, so we headed up for free coffee and buns. The buns were great, we ate them on the way out of the basin. Had it not been for needing to get some distance done today, I’d gone back and gotten another.

There was a tow going up river just as we came out of the entrance to the marina. We set up a passing situation and we eased around Lisa Michelle and we were off. With about 120 miles to the lock, and Lisa Michelle doing about 5 knots, and driving all night, we should meet up again at the lock Sunday morning. I’m hoping with lighter currents at night, they will beat us there and have already locked through.

More great scenery along the way. Lots of tiny shore camps and houses like we saw in Canada. Lots and lots of Mc Mansions perched up on the rock walls. There were lots of little coves that would be great to spend a night in. Coming out of one of them was Onward a looper I had briefly talked to at Green Turtle Bay. They had spent 2 days in a cove with friends that had a pontoon boat.

Like yesterday there were a ton of fish boats out zooming across the water. Since it was Saturday there was a big uptick in pleasure boats with pontoons leading the way.

It was cold in the morning with no wind, then the wind came up and made the river choppy and reduced our speed. Then the wind dropped and it became really nice out. Clothing went from long pants / heavy shirts to shorts and tees for the evening. Final high for the day was 74, way up from the 54 on Friday.

On one section of the river there were new houses that had been built at the top of the river bank. They had 2 story concrete garages. At the top of the garage was a platform that held the outside air conditioning units. The house was then built on top of the garage. So what they had was a sturdy garage that could withstand all the flood water loads. The house in theory would be high and dry. All of the house systems (Hot water, AC , heating, electrical, etc) was high enough up so it wouldn’t get flooded. Not sure I’d buy a lot and build a house there, still risking a lot.

The barge traffic was light, most of it was coming down river, so we passed going our own directions. We got to Clifton where there are some back to back curves in the water. We had about 4 miles to go and there was a tow about ½ into them. I asked how fast he was going and he said just under 5 knots. So we backed down the speed and tailed him along to Clifton. It added some to the trip, but the engines got a chance to cool some. We got some better looks at the scenery and at one point there was an eagle in a tree watching all the festivities.

We got checked in at the desk and taped our Looper card into their guest book. We looked back to see the boats we had met on the trip. Pretty cool and good to know that some of them made it this far.

Outside the marina we saw that power came to the marina to a large power board mounted 20′ in the air above the levy wall. There was flight of stairs up to it so someone could climb up and disconnect the power before it was all flooded out. All in all they would be looking at a 50′ flood depth, a little more that what they got in 2009 and 2010.

Getting the marina car we headed into the downtown are. The restaurant wasn’t open until six so we walked down to the general store. A real find, Susan got great rib-eyes to cook, and ½ lb of the olive-loaf that I love for sandwiches. I also picked up for only $2 a garden hose valve, so I can replace the one that is leaking. Yay retail therapy!

One thing that tickled me walking downtown and signs that said “Danger – uneven historic sidewalks” at every corner. I’m thinking our neighborhood should invest in a stack of them, much cheaper that pulling everything up and replacing them.

Dinner was at the Pirate’s Lair, a Cajun food place. I’m hoping that if I eat enough Cajun food in the next few days it will help me understand the tow operators. I went with the Jambalaya, it had a heat that slowly built to the point that sweat was coming from my forehead. Susan went with fried oysters that were good but they gave her a huge plate that she couldn’t finish. The people next to us had recommended the crab and shrimp combo, but it looked like more food that either one of us could eat.

We got back to the boat and tried “Boiled Custard”. It was in the milk section next to Egg Nog (hard to believe that Egg Nog Season is here!), the clerk said it tasted like melted ice cream and it did. (She also tried to sell us “Pork Souse”, but we were clever enough to pass on that.

Off to our only lock on the Tennessee River, it’s about 4 hours away. Hoping to get through easily and then be into our next marina for a few well earned rest days while we wait for a good weather window to do the 400 miles to Mobile.