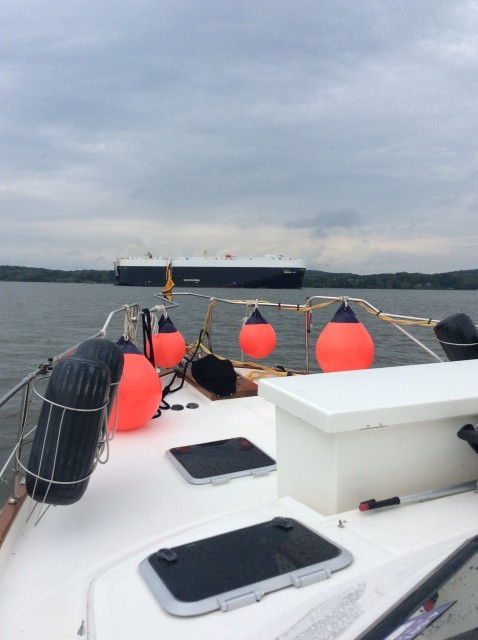 This is our fifth summer at Bohemia Bay Yacht Harbor. We love this place. It has a great location on the river, nice docks, great pool, skilled mechanics on site, etc. Marina management is by Ken, who is always on top of things. Colleen runs the fuel dock and keeps things flowing there.

BBYH is a condominium, most of the people own their slips. For the last few years the board has been setting aside money to do events. For instance there is a BBQ, a few ice cream socials, movie nights, etc.

Today was their big charity day. They open up the marina to kids that have Downes Syndrome and their families. About 75 kids came with the total crowd of about 210. Everyone can play on the beach, swim in the pool, eat at the BBQ and get a boat ride.

About 11:15 my first passengers arrived, 6 kids and 5 adults. All the kids had life jackets and as the parents went by on their way to the pilot house, I pointed out where spare jackets were.

With the Captain of Blue Moon and the Admiral from Summer Days, helping crew we headed out into the Bohemia. Once we cleared the docks, I asked “Who wants to drive?”. Lot of takers and pretty soon we had the first kid settled in the upper helm. After 5 minutes the timer went off and we swapped drivers. Or second driver was more interested in driving in circles, with a pretty empty river (2 crab boats and 7 other boats giving rides) it wasn’t a big deal. They really liked it when the Quo Vadimus crossed her own wake.

As the other kids too turns I talked with the parents about the boat and that we had done a 6,000 mile trip, yes we did live on it, it was a little cramped, but we loved it.

They talked about how the kids love this event and it was something they looked forward to.

Pretty soon our hour was up and with all the kids having a chance at the wheel (some went twice) and we were back at the dock.

We unloaded, got something to eat and then loaded up our next set of passengers this time 8 kids and 5 adults. Lots more kid driving, and farther out another set of donuts. I’m sure that the Captain of the “Green Bay” automobile carrier was wondering what was going on. Not often you see a 45′ Bayliner doing donuts at 8 knots off your starboard. (Yes, we were far enough away that we were not a hazard.)

We docked after our hour and unloaded. We got released from duty, everyone that wanted a ride had gotten one.

It was a great day, over 25 people from BBYH helped out, the kids had a wonderful time. My special thanks to the crew that helped me out. We were busy the entire time swapping drivers, keeping an eye out for other boats, making sure nobody fell overboard, gawking at the Green Bay, etc. Very pleased that there were three of us.