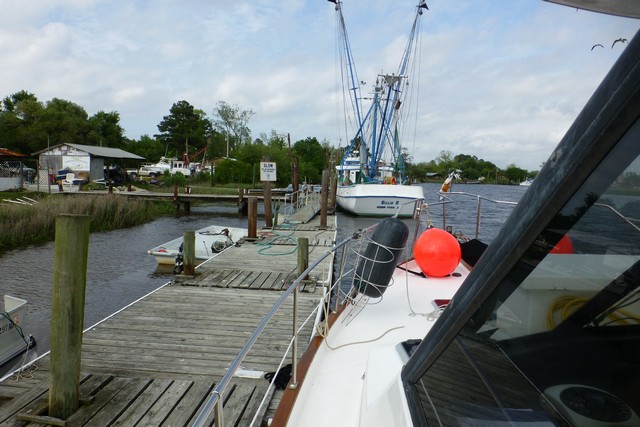 I was waiting to leave until about 9AM, that would have been “slack tide” the time when the tide changes direction. It’s a little easier to get off the dock when the current isn’t moving you around.

But there was rain in the forecast, so we opted to wait the rain out. Glad that we did, it rained pretty hard for about 2 hours. It wouldn’t have been a fun ride. Around 1 PM it started to clear off. I called the next marina, the guy is there until 6PM so we had a pretty decent window to get there. Charleston is about 70 miles away, that would make about an 8 hour ride to do on Sunday, so going 20 today is a good idea.

We got off the dock about 2PM. It was a little windy, but the wind was to ease in the late afternoon.

The ride through the low country was pretty, but there are lots of marshes.

One section is a cut that they dredge on a regular basis. The island next to the cut is set up to collect the silt from the digging. They have installed drain pipes in the base of the pit to return the water back. They do it every two years or so, it got done last year, but there were some winter storms that put a lot of silt back. (Info from one of the local people that I sat on the dock with last night)

As we’ve done the Great Loop we’ve stayed in a variety of marina’s. Really nice ones, average ones, some that need work, some that are brand new. We’ve also stayed at a number of places that are not really a marina. On the Illinois River we stayed one night tied to the work barge of a tow company.

Tonight’s marina is B&B Seafood in Green Pond SC. They have a 200 foot dock that used to be home for their shrimp fleet. But as the shrimp business died off, they now rent space on their dock. There is 1 110v outlet and water. The docks are much older and show lots of wear. Only two shrimp boats are left, so there is about 100 ft of open space.

A little wind and slack tide made it an easy docking. We walked up to the office / shrimp store. Our nights fee was only $25. That is55 cents a foot, same as the work barge, but not as low as Boca Chita, Florida at $2.50 per night.

Disappointing news at the store, all the fresh shrimp were gone. All they had were frozen. I learned later on that the frozen shrimp were theirs, so we could have gotten that. On the other hand we are not set up to keep 5 lbs of frozen shrimp.

Susan decided to go fishing, all the gulls and dolphins knew that fish were down there. She didn’t have any luck, but had a good time trying.

We had purchased a new grill in Tavernier to replace the useless marine one. I spent some time assembling it and we set it up on the dock box to try it out. Gunn and I had built a table that mounts in a bait holder, but I though for the trial run the dock box would be better.

It fired right up. Susan put a packet of small potatoes with fresh herbs to cook. We were both impressed with the grill, on high it got to 600F pretty quickly. On the low setting it was about 300 degrees. It also has a disposable drip pan for quick cleanups. Much better than the other one. And at about 1/3 the price it won’t be a big deal to get a new one every other year.

After dinner Susan tried fishing again with no bites even though the dolphins were feeding on the other side of the river.

I went up and sat with one of the local residents. He had done some repairs on his son’s boat, they were out for a check out ride. While he waited I got to hear about the shrimping business, down because of overfishing and bigger schools of fish from the south that range up to eat them. 10 years a go 4,000 lbs of shrimp was a good day, now if you get over 1,000 lbs that’s great. But with fuel costs and the dropping wholesale price, it’s hard for the smaller companies to make a go of it.

He also gave me a towelette to keep the “no-see-ums” away. It worked pretty well. He said after using them, he’d stick them up in his hat to keep them away from his head. We’ll need to try to find them.

We watched the lightning draw closer, the storm was to the south, but it looked bigger that the morning storm that we waited out in Beaufort. So I headed back to the boat and closed us up for the night.

About 1AM we heard the kids return in the boat. They were laughing, so I guess it was a successful trip. It also made sense from their earlier efforts to make sure the radar was working. Lots of day markers out there, radar helps you miss hitting them.