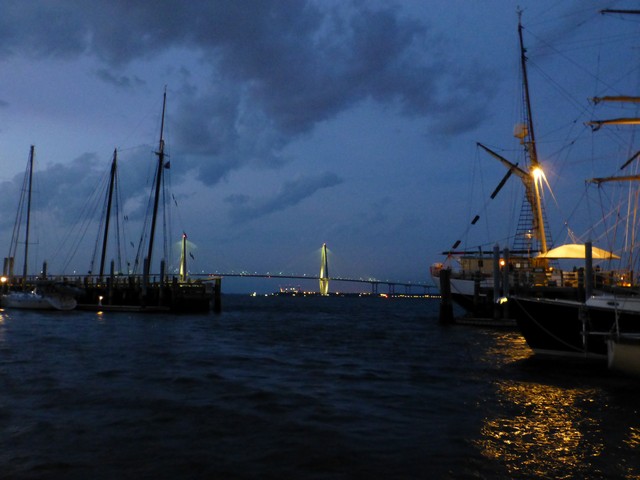 One year on the water as of today!

With no shore power we ran the generator for about 30 mins to get coffee and breakfast going this morning. Having the generator has been great. It was good to run it from a maintenance stand point, the last time it ran was over a month ago.

We had a 50 mile run to do today so we pushed off the dock at B & B Seafood a little after 7AM. We had the tide with us for the first 10 miles so that went pretty quickly, but then we crossed over the sound and for the next 3 hours we chugged along a little over 7 knots.

We did see a number of dolphins on the way, but as with the ones recently they are not into interacting with the boat and Susan, it’s more about feeding.

Near Yonges Island we came to the Stevens Towing Shipyard. I was impressed with the number of big boats they had on their wall. They also had two railway system for getting bigger vessels out of the water. They had two of the large fuel barges up on land to work on. It’s been pretty tricky in this part of the ICW, not sure how they manage to easily move them down the river.

Since it was a bright sunny day in Charleston, there were lots of boaters out and about. After the mess in Ft. Lauderdale Susan had said we should hide out in marina’s on the weekend. I’m thing she may be right. But we managed to be nice and not swamp anybody and give the few sailboats clean, slow bell passes.

Docking in the Charleston Marine Center harbor was interesting. Wind off the dock and we were in a corner in front of a huge Krogen (hope they are gone by Tuesday) Got the bow to the dock and the dock hand tied us off and I was able to pivot into the slip. After a year our docking skills have gotten better, but I’m still surprised about some of the places we get into. (And fret getting out of them)

I checked in and walked down to “Seahorse”, love the Looper flags, I’m getting better at spotting them from a distance We had Thanksgiving dinner with them in Apalachicola, part of the huge group of 24. They also crossed over to the West Coast when we did. They were not there, but I left a boat card (another great Looper item).

Early afternoon was taken up by planning our stay, making reservations, etc. Around 4PM the crew from “Seahorse” showed up to visit. We had a good chat catching up on their trip since Thanksgiving (longer on the West Coast of Florida, and across the middle) and where to go and see while we are here.

After that we headed up to the Beirgarden, a craft brew pub. Nice setup outside with games to play (corn hole, giant size Jenga, etc.) They have about 40 brews on tap. One of the cool things is a series of self service taps. You buy a pre-paid card, slide it into the tap and get exactly how much you want. They have a wall of 6 special beers that change every week. There are community tables that have 4 taps in the center and about 10-12 chairs around. The perfect thing for a group of friends. Thirsty? Just help yourself.

We had a pimento cheese stick that had been dipped in panko flakes and deep fried. It came with an awesome bacon jam. Just order the sticks to get the jam. We did two flights of 4 beers and the cheese sticks for $20. Not a bad deal. Oh yes, we cleverly drank all of the credit on the card, so we don’t need to rush back.

A short hike downtown and we were at the Lowcountry Bistro to celebrate our year on the water. We had she-crab soup, shimp and grits and Frogmore stew, (shrimp, sausages, tomato, onion and fingerling potatoes. ) The sausage had the right amount of spice for the dish. There was a fried green tomato layered on the grits to give it even more of a Southern flair.

We walked down Market Street and picked up three kinds of fudge. The old buy two get one free trick when you really only wanted one kind, works every time. Downside of the free deal is they put it into a bag that all of the tour operators know. Holy Bat-signal, now they know I’m a visitor.

On the way back we picked out about a half dozen places to eat on Monday, have to watch the weather, we may get forced to spend an extra day here.

One store had old time candy like Moon Pies, pop rocks and fizzies. I loved fizzies as a child and my children love them too. I got a box to send onto the grand baby, she will love them too!

During dinner we talked about all the great things that we’ve seen and done and ways that we have changed. This has been a great adventure, glad that we are on it. Now on to the Second Year!