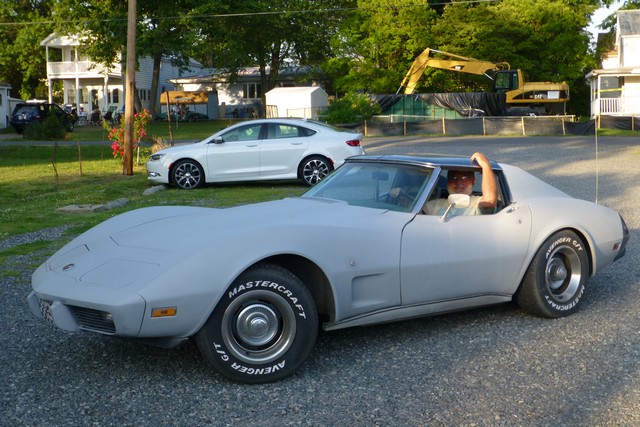 We got into Colonial Beach on Thursday with the intention of going one more place on the Potomac and then heading north. But the NOAA forecast for Saturday had waves of 2-3 feet.

Let’s talk wave forecast for a moment. When they say 2-3 foot waves they mean that 90% of the waves will be 2-3 feet. 9% will be bigger at 3-4 feet. And 1% may be bigger at 4-6 feet. Not happy thinking that every hundredth wave will be huge. So I opted to wait. And it may be a long wait, the weather looks this way until Thursday.

On Saturday we did a bike tour of town, there was a beach festival and we went up to see the car show and the vendors seling from everything from seashells to sauces. There were a lot of families on the beach, it was a great day of fun and sun.

Sunday we snagged the marina truck and headed around. On of the downsides of having family members that are recycle oriented is that I don’t want to toss easy recycled trash out. We have a lot of cans, glass bottles and plastic bottles. At this point we had lots so we headed out to the transfer station.

Of course the instructions of “head out of town on 205” neglected to say “West or East” and I picked West. After 2 miles I figured out that I was not going the wrong way but we came up to Wilkerson’s Seafood. Ok, See Food and Eat It has been my mantra, so we stopped. Susan had amazing fried oysters and I had the prime rib sandwich. (Ever wondered what happens to left over prime rib? Slice it into ¼” slices then do a quick grill, wonderful!)

Now going East we found the transfer station and transferred our recyclable items to their big recyclable container. Environment saved!

Virginia is the birthplace to three US presidents, and George Washington tops the list. We toured Mount Vernon, and now it was time to visit the birthplace. But first it was antique time! Susan had prior experience in selling real antiques, and I’ve spent many an hour looking at Junque. So we stopped at an Antique Emporium (aka a big barn filled full of stuff) to see what bargains we could find. Sadly nothing that we needed or wanted badly.

George Washington’s birthplace was pretty neat, there was a great visitors center that talked about his grand-father and father’s farms. Most of the early founding fathers were pretty wealthy, and it’s nice to see some of where they got their money from. I have been impressed with the National Parks tat we’ve seen this trip, lots of good info and places to visit, I’m happy that we purchased a pass to all the parks.

While Virginia is full of government contractors, some of their greatest exports is beer and wine. On the way home we stopped at one of the local wineries. Karma of starting off with Canada wines and ending with Virginia wines. The ones we tasted are pretty good and we selected a bottle to take home with us.

I’ve posted often about “marina cars”. They are all a little different, but most of them are run of the mill cars. One of the marina people wanted the truck we had to run to pick up some bigger items, so they wanted to trade us to take the car. It’s a 1975 Corvette. Umm, pickup truck for a Corvette, let me think, a nanosecond, and I’m in. In a wild squeal of burned rubber and flying gravel we were off!

OK, so not really. We both got into the car and had an “Ummm” moment, when we both realized that our butts were lower than our ankles. We were in, but there was a big debate if we could get out later on. Cool thing about marina’s they have 70 ton boat lifts, so we can get out here, the restaurant could be a different story. I gingerly back out, not a good thing to hit the stands of boats “on the hard” so they fall over.

We made it to the Lighthouse and got out of the car. Dinner was as good as a week ago. I had the mussels and a grilled portabella mushroom. Susan went for the filet steak. When kids say “awesome sauce” they are talking about the sauce she had.

The night was quiet, I watched NASCAR and Susan did internetty things. Monday will be boat tasks, mostly along the lines of cleaning.

Monday and Tuesday were indeed that, just hanging around the boat. I did get some things done and we did get bike riding in so from that standpoint it was good.