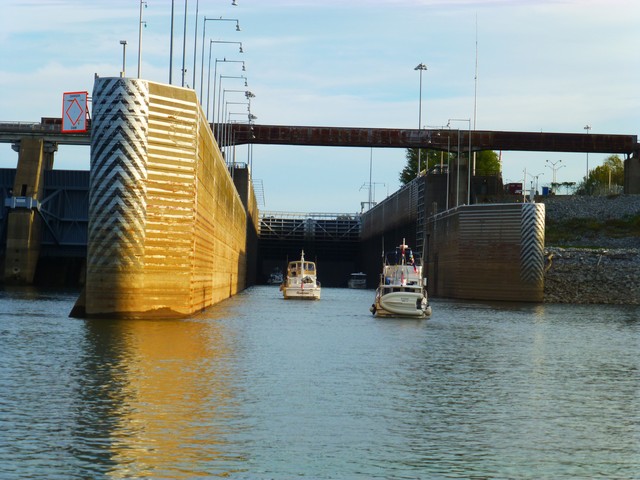 We spent the night in the shadow of the I-24 bridge north of Paducah, KY. We had a full moon so it was nice we could see the six other boats in our Looper Flotilla: Moondance, R&R, Corkscrew, Roxanne, Diablo.

I was up to check a few times and was rewarded on seeing sheet lightning flash across the Paducah sky about 5 miles away. It was very pretty and it was reassuring that the storm was moving away from us and would be gone by morning. I was hoping to see the lunar eclipse in the morning, but there was some obscuring cloud cover. The Captain of Moondance had said he heard some tow captains talk about it, but he only caught the tail end.

Up at 6:30 AM, showered and ready for a new day. Captain of Moondance called the lock at 6:30, and got a response we would be in the first upbound tows of the day. Yay!!! We are on our way!!

When my father lived in St. Thomas he talked about the local time concept of “soon”. “Soon” means sometime, maybe an hour, maybe 2, maybe 3, but soon. “Soon” has crept to the lock system of the Central US. Soon turned out to be 9:15AM.

Actually, we pulled anchor at 9:15 AM. We displayed our vastly increasing station keeping capabilities for the next 30 minutes as we drifted down towards the lock. At 10AM we were tied to the lock wall.

Well that is the next thing, the term “Lock Wall” is misleading. The wall is made for commercial barges, so it’s a series of “cell”s stacked side by side. Think of 15′ diameter toilet paper tubes stood on their ends. Fill them and coat them with rough concrete and make a wall out of them. Tada! You have Lock 52. Through skillful bumper placement by Susan (love those red balls!) we were able to fend off the “wall” for the 10′ lift.

At 10:30 AM the all clear horn sounded and we were on our way! With a light wind from the South West the chop and waves were not as bad as the day before. (There were points yesterday where I thought we were back on Lake Michigan and Diablo took a few over the bow). With Moondance leading the way on one engine, we did 8 kts up river.

We only had a few up bound barges to go around, they were mostly empty and were not tossing off big wakes. We reached the Cumberland River around 12:15 PM, much to the relief of all of us and the tow crews around us. At the turn we met up with My Therapy, they were coming down the Ohio. Our flotilla of 8 sailed up the Cumberland.

We met two up bound tows, both loaded with stone. We passed both of their quarries, they are huge!! One had a spiderwork of conveyer belts and lifts to move the stone around. We watched a giant digger lift stone out of a barge and into an even larger Tonka Truck dump truck.

The Cumberland river is very pretty, but there is almost nothing along side. A few houses, a few very! steep boat ramps and a few bridges, but mostly trees. Not any place to stop and anchor, all of the side streams were about 5′ wide.

Around 4:15 we pulled into the Barkley Lock area. The lock master wanted us out of the channel, so we went and hung out near the dam.

There were people fishing near the dam for catfish while the Asian Carp jumped off and on around them. At 4:30PM the horn blew that they were emptying the lock chamber. We watched in amazement as the fish started leaping out of the water near the lock wall. Wow. The churn of the water and the 100′s of fish that were jumping. The seagulls soon were wheeling overhead and snatching the fish as they leaped out of the water. Dinner on the fly!! This went on for about 15 mins as the lock emptied it’s vast quantities of water.

The lock doors opened and the Mr David, pushed his tow out and the Looper Flotilla filed in. We waited for Diablo to limp in, on of the transmissions was dying. A ninth boat needed space so we hung extra fenders and the crew of A-(Ford)-It was soon tied along our side. The 57′ doors swung shut at 5:45 PM and we were on our way UP!!

Arriving at the top we all filed out and headed for Green Turtle Bay, except for Hotei. Their engines wouldn’t start. Only 2 miles to go to home and disaster strikes. But wait, Roxanne has bow and stern thrusters, so she ties up to the side of Hotei and ties off. Then the two of them glide serenely out of the lock and off to the marina.

The staff of Green Turtle Maria stayed late to see the 9 of us safely into the docks, they rock! We dock at 6:30 PM, two minutes after local sunset. Susan grabbed flashlights and the flotilla met Hotei and the plucky Roxanne heading into the basin. Smooth as silk, Roxanne pulled to the fuel dock and the flotilla crew got Hotei tied off. They then did the same for Roxanne minutes later at her slip. We were all home safe!

Dinner was late, after 8PM and there were toasts to the Looper Flotilla; to Moondance for leading, even while on one engine; to Roxanne for being the little tug that could; and to Diablo for making the 255 mile journey in a houseboat in adverse conditions.

We had a great time at dinner. Lots of stories, lots and lots of laughter. It was after 10:30 before the weary crew of Quo Vadimus stumbled into our berth and collapsed.

We made it! 580 nautical miles (667 land miles), 82 hours driving and waiting for locks from Chicago to Green Turtle Bay. Lots of cool places (well except for you Lock 52) and nice people (except for you towboat at Rockdale). It was a great adventure, but we are both happy to have the bulk of the barge traffic and river trash behind us.

Here is to the Looper Flotilla! May you all have calm waters, short lock times and beautiful sunsets.