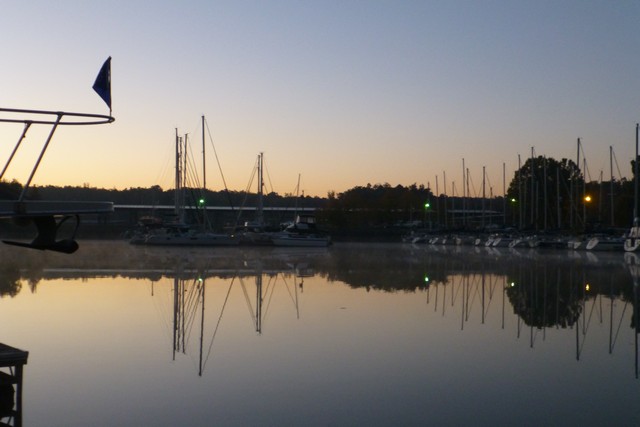 Before the “Looper Flotilla” splits off we did one last group event, dinner at Patti’s 1880′s Settlement Restaurant. Like Hoppies’, this is a place that all the Loopers rave about.

Fun fact, the town of Grand Rivers is in a dry (no alcohol sales) county. Kentucky is known for all of the fine bourbons and there are still are dry counties. (Fun fact two, the county that Jack Daniels is made in is also a dry county). Anyway that means BYOB to dinner. We had to do that last night, and we packed a cooler bag with wine and beer for the evening.

We all met at the gazebo at the top of the dock for a short Docktails and to make sure we were all gathered into the group. Once we were all there, Sonny (captain of Corkscrew) got Patti’s to send a van and we were off.

The place is huge, it must seat over 400 people. They say they do 350,000 meals a year and I can believe that. On a rainy Thursday in October the place was packed. They put us at a table for 16 there were two smaller tables in the room. One was a couple that was celebrating their wedding anniversary. A Patti’s tradition is to sing “Let me call you Sweetheart”, so of course we joined in to help out.

With wine glasses full (and wine bottles hidden under the table) we toasted the Looper Flotilla on a successful trip. We then toasted the Captain of Diablo for sticking out the adventure on his houseboat and being the most courageous. Roxanne‘s crew was toasted for their towing of Hotei out of the last lock and to the docks. The final toast was to the crew of Moondance for leading us through the trip, even though they were running on only one engine.

Patti’s claim to fame is their grilled items, both Susan and I had the 2” thick double pork chops. They came with a stuffed baked potato. Each of the potatoes are of those ½ lb monsters, full of butter and bacon and topped with ¾ cup of sour cream. Eating the pork chop was interesting, we would cut a slice, pick it up and notice that it was 2”, so we needed to then re-cut each piece to make it a mouthful. The pork was good, very tender and moist.

We had a great time and were pretty loud, I felt bad for the other tables (singing not withstanding) with all of our noise. But lots of good conversations.

I did apologize to the crew of Roxanne for repeatedly cutting them off and running in front of them the entire trip. Susan had noticed their cool one person dink system and there was no way I was going to run 15 hours with her staring at it going “I really like that dink system”.

I also toasted the Captain of Moondance on his ability to speak flawless “Tow Captain”. He would get on the radio and all I’d hear was a long sequence of long vowels and missing consonants. The Captain would answer back with a longer string with a “One” or a “Two” in it, that was my key on what side to pass on. Most of the table then copped to also not understanding what was being said. He accepted our acknowledgment of his skills with the graciousness of a true southern gentleman. But did point out as we got farther south it would get harder as the Cajun dialects got more pronounced. I can’t wait.
We got back to the boat very late, well after looper midnight and approaching looper dawn. Which is fine since Friday is an off day and Susan has spa things planned.