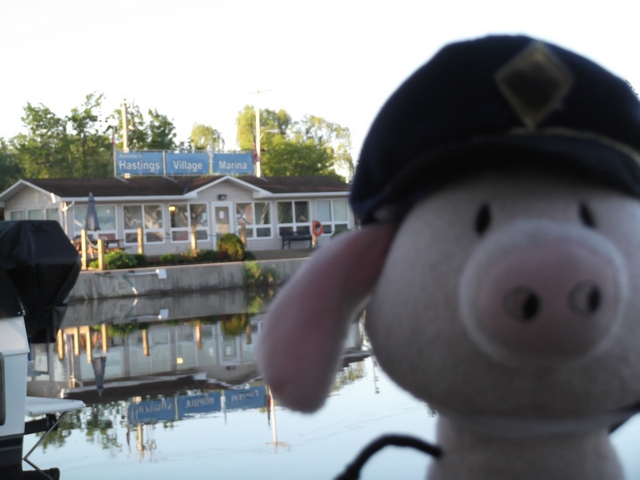 Filled the aft water tank, the forward one is about 1/2 full and we will make it to Peterborough before it needs to be refilled.

In my check of the engines, I noticed that the shaft seal that is supposed to have a slight leak (water keeps it cool) but the leak was about a drop a second, which comes out to about a gallon every 8 hours.  I’ll keep an eye on it and if it gets worse, I’ll get a mechanic to tighten it. (It’s a 3″ nut, I don’t have a wrench that big).

We were off the dock at 11 and heading north to do our locks for the day.   Things were going great until Lock 16 in Healy Falls.  This is the lower of the double locks.

A double lock is one where the two locks share a center door.  The center door towers 70′ over you when you are in the bottom lock. They use the water from the upper lock to fill the lower lock.  In our case, there was a tugboat coming down while we were going up.  Because of this they wanted us to go as far forward in the lock as possible.

With her now normal skill, Susan got us on to the cable at the front.  As I moved the boat stern up against the wall there was a loud crack and a smack of something hitting the water.  The cable had broken and went crashing into the water next to Susan.  She quickly stepped back to the next cable, snagged it and tied off.

Deep breaths all around as I went back to tie the stern off.   There was a small pile of concrete from the wall on the walk way that the end of the cable had taken off the wall on it’s way down.  A black mark on the side of the cabin was the only mark on the boat. We were lucky.

We calmed down and soon the water level was rising. As the doors open we saw a 2 person tug come through the opening.  There is a side plate that said it was made from a Glenn-L design, and had the builders names on it.   It was piloted by an elderly couple who passed by and were soon tied up in the lower lock.

We then moved s l o w l y forward and got set for the next lift.  During it we looked up at the cables every few seconds to check on how they were doing.

We were soon in the winding Trent River.  Most of the trip was made a “No Wake” speed of 6nm or 10km per hour.  There are hundreds of houses along the shore with flat yards that run to the edge.  I can see how flooding or even a large wake could fill their yards.

We got docked at 4PM and did our shutdown sequence and we were soon on our way to <i>Banjo’s</i> for dinner.   It is a small place and they were playing 60-70′s songs in the background.  The food was good and we had a great time.

Next was a walk into town to look for post cards and to see what was around.  We found a used book store and stocked up since we won’t have a lot of internet access in the next 6 weeks.  So its back to dead tree books rather than e-books.

Susan replenished her fishing supplies and went back to the boat to read.  I grabbed a <i>Holy Smoke Beer </i> that I had gotten in Campbellford and went to talk to the dock residents. Two slips down from me is a smaller version of my boat, and I went to talk to the owner for awhile.   On the way back there was a group on the dock that I stopped and talked to for awhile.  They gave me great tips to places to go on our trip on the Waterway.   I also got a heads up on trash in the water on the other side of the lake.

Susan collected me about an hour later and we went to the corner ice cream store for sundae’s.   I stayed up to do some postings and to check out the stars.  Being away from the light pollution really opens up the night time sky with billions and billions of stars.

(I added the picture from the morning to get the marina sign, but you know how Mr. Photo Bomb is … )

One thought on “Hastings, Ont”