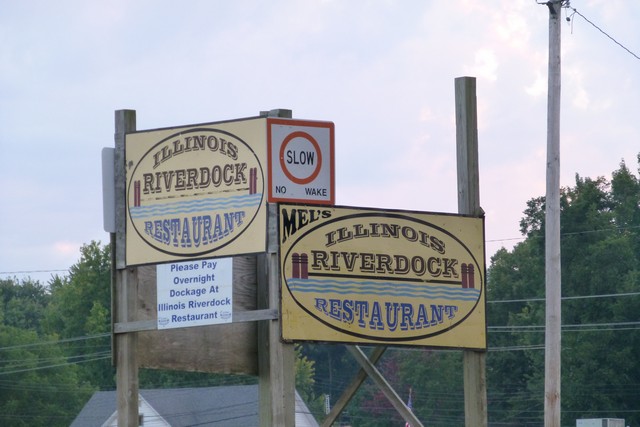 Our stay on the Logston barge was good. We woke to a wake once about 1:30AM but soon fell back to sleep.

When I got the tour of the tug Pin Oak they had said they work a 5 PM – 5AM shift. (Thanks for the tour!) But right at 5 AM, after crew change, they started working. We watched as they moved a barge that had pilings on it around us and back two barges. Then they grabbed the barge with the crane and moved that. It was impressive how they moved, how smooth the movements were and the general lack of crashing and crunching sounds. We had their VHF channel on and it was short commands and responses. It was great to watch professionals at work. By 6 AM they were back in their berth and shut down.

But we were now up and watching the Sun. Once it was up enough for us to be able to see trash in the river we headed out. (That would be 6:45 AM local time)

Once again the Illinois was calm. We had a good current that helped us move along, but the early morning was a very pretty time to be on the water. One of the Captains at Logston had said “Hours of boredom around minutes of terror”. With the river like this, I can see why he loves his job.

We slid by the LeGrange lock at 7:30 local time. The wickets were down and we had ripple free water to slide through. We listened to Cicadas going down the river, it’s amazing how they can overcome the drone of our engines. I can’t imagine how loud it is on shore.

Around 8 AM we passed the Spirt of Peoria one of the few authentic paddlewheel-driven boat that offers passage up and down the river. They take 3 days from Peoria to St. Louis and another 3 back. It made the morning better, and brought back what we both thought the river should be. It almost made me want to put on a white suit and a black bow tie.

The day warmed up, by 11 AM it was up to 71F from our starting point of 65F. We could not ask for better weather for this trip down the river. The blue skies, the lack of wind, the thump of the Asian Carp, what could be better?

Like yesterday the Captains and the bridge operators have been very nice. I call and ask what they want us to do, and they are willing to help. One Captain said they needed to make the corner and we fell in behind them and waited until they gave the go ahead. When they did, it looked like they had slowed some to get us by. Thanks!

Around 1 PM local time we pulled into Hardin, IL. About 6.5 hours and 58.8 miles since we left Beardsville. We could have kept going, but the trip is about fun.

We docked and moments later Compromise the Looper boat that we had met in Trenton Ontario about 10 decades ago pulled in behind us. (Actually it was 1 June) We had lunch with the crew at the “Riverdock” and exchanged our adventures. They wanted to get to Grafton for dinner and then head south, so they took off after eating. Compromise is from North Carolina, so we will meet up with them again.

Dinner (after naps) was back at the “Riverdock”. Wonderful smoked chicken and a brisket that had blackened ends that remided me of when I met Susan. A great dinner.

I know that we all look for bargains. So I asked at dinner “If you eat Lunch, Dinner and Breakfast here and leave a great tip is the dock is free?” The waitress came back and said, “Overnight is $15, but the tips need to be really good!” Alrighty we are in for that!

On the way out we met the crew of Saylors Delight. They started in Southern Virginia, so another crew we will met later on. We recommended what we had just eaten, but we gave them insider info that the thing to do is order pie first and dinner later. Or maybe pie followed by pie.

There is a pretty steep ramp that connects the dock to the shore. I was first and made it to the dock. Behind me I heard a splash and a thump and I thought “Susan has fallen”. I turned quickly to see an Asian Carp sliding across the dock inches away from my feet. It slid the entire width and splashed into the water at the other side. Pretty amazing!

The river is still calm and harvest is still a few days away, so we are hoping for a quiet ride to Grafton.