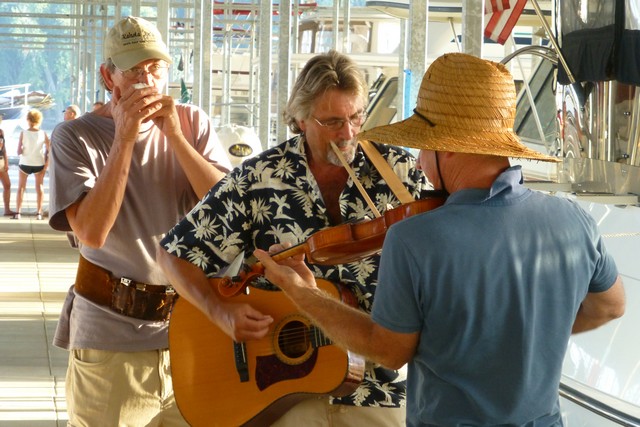 On our way to breakfast we said goodbye to the crew of Saylors Delight, they were off to make some big jumps of over a 100 miles a day. We wished them well on their voyage.

At the “Riverdock” we had a huge hot breakfast. With our last five days of getting up pre-dawn and heading out it was very relaxing to eat breakfast at 7:30AM

Keeping an eye out for Asian carp we pushed off into the Illinois River. There was still a pretty decent current going so we made good time. We didn’t see much traffic either way, but we did see lots of barges waiting to be filled at the grain silos. I continue to hope that we are in the window before the harvest on the Illinois and Mississippi and after the harvest on the Tennessee.

The Brussels car ferry was interesting, it’s on a call basis and their appears to be two of them shuttling back and forth. It looks like the small push tug swivels on the side so it is always pushing the boat forward.

We got into the Grafton marina after what had been a pretty short day, just over two hours. We did the hour long fuel dock thing of 192 gallons of diesel and a pump out. Pretty excited, we did the 360 miles from Chicago to Grafton in 9 days, an average of 40 miles a day. But we are pretty tired here, looking forward to some time off the water.

Home is under a covered dock! We have one at Bohemia Bay Yacht Harbor and it will nice to be under one here with the temps going into the mid 80′s. The difference between this dock and home is that the dock and roof are tied together and they float. So as the river rises, so does the roof. A pretty clever design.

But we soon learned there is a flaw. The Asian Carp that leap out of the water sometimes leap and get caught between the floats and the deck. They get trapped inside the space and die. And rot. And start smelling really bad. The dock mate pulled 5 fish from the finger piers next to us. Uggg.

Taking advantage of the shade we cleaned the boat inside and outside. Between the spiders and general dirt the Quo Vadimus was a mess. We unloaded the cockpit of the bikes and rack to allow the deck to be scrubbed down. About 2 hours later we were done and everything looked much better.

I knew that the Chesapeake and the Andiamo had docked a few hours after us. I wandered over to see how their trip went and what their plans were. They were out in the far corner of the marina in and they were only staying the one night and then heading down to Alton.

When I got back to our dock we helped the crew of Fiddlin’ Around dock. It’s a boat with 4 musician friends cruising around from Chicago. Once they got settled in, they played a few songs on the dock. They were going to play at the marina bar later that evening. They were very good, we will make an effort to see them later.

We went to the “Piasa Winery and Pub”. They had a great selection of beers to choose from and Susan was happy with her choice. Their special was either a “Batman” (beef patty) or “Robin” (chicken patty) served between two grilled cheese sandwiches. Which in theory sounds really good, in practice there are four pieces of bread. Maybe if it had been only three pieces (a patty served on top of a grilled cheese?) it would have been better.

On the weekends it appears that Grafton is the place to be. There was live music in the two places across the street. As we walked towards the marina we passed another singer playing folk songs.

We went to the marina’s bar to see if the crew from Fiddlin’ Around had shown up yet. We had a drink while we waited, but it started to become close to Looper Midnight so we headed back to the boat.

Our trip on the Illinois didn’t start off well, but the last 6 days were good. Very tired from the combo of the trip and cleaning, it’s nice that we don’t need to go anyplace on Saturday.