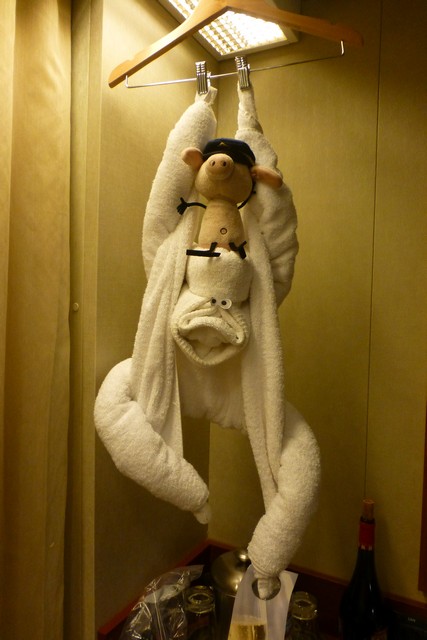 Yesterday our trip to St Thomas took us as far south as we would go on this trip. We’ll now race north about 950 miles to be in Ft. Lauderdale for the next two days. It gives us a break to relax from all the touring that we’ve been doing. On the next leg we will have sea days between the tour days to break things up a little better.

Susan figured out how to get fried eggs and I found where the amazing breakfast pastry is set. I had a chocolate chocolate-chip muffin that was very cake like, it was very very good.

After breakfast was the second part of my behind the scenes tour. Today we visited ship stores, bakery, pastry kitchen, the full kitchen and prep areas, dishwashing, waste management, laundry and tailoring and the oriental restaurant Tamerind’s special kitchen. I’ll put all the details in another post. (I’m going to geek out, so you can skip it).

We had sushi for lunch, it’s made fresh daily, and there were 10 different rolls. For health / safety reasons, they are all cooked rolls, but they were very good. My favorite is the spider roll, it has fried soft-shell crabs in it.

I spent time on our balcony in the sun finishing off my book. Very nice, there is a gentle rock to the boat.

At 2:30 I headed down to the sports bar for the International Beer tasting. Because it had not been advertised, there were only two of us that showed up. The bartender kindly gave us both a free beer (we chose Boddingtons) an English Ale. We chatted with the bartender about some of the different styles and beers that we like.

After that I headed back to the room for a nap. I had just fallen asleep when Susan arrived from her bead making adventure. We read together for awhile and then watched a movie about P.L. Travers and the creation of the Disney version of the Mary Poppins movie. It was pretty cool, she really terrorized the Disney staff in making them keep to the story.

Dinner was at the Pinnacle Restaurant, back to it’s regular menu. Unlike last night where we both had the same thing off the menu, we had different things.

Susan started with a lobster soup. The bowl started off with little bits of lobsters and vegetables in a bowl, they then poured a lobster bisque.

Having learned my lesson with the 400F soup from the prior night, I went with the dudgeonus crab cakes. They were a cornmeal and crab mix. It came with a lightly flavored apricot sauce that really enhanced the flavors.

Susan opted for the 8 ounce fillet, I went for the NY strip steak. Our veggies were Brussels sprouts with a crispy cheese cracker and mashed potatoes. We had three different sauces: béarnaise, horseradish-mustard and garlic butter.

Dessert was “A non-traditional Baked Alaska”. It was cherry vanilla ice cream, cake and a whipped soft meringue that had been toasted. It was very good.

The evening show showcased the four male singers, the show is called Cantare. The MC said that they were hired to do this show, the other two shows (Garage Band and NYC) were then built around these 4 singers.

They were very good, they sang a variety of songs from a number of decades and styles. They opened up with “He ain’t heavy” moved through “It’s a wonderful world”, a number of show tunes, Beach Boys, Beatles and Queen songs. They closed with four Italian love songs, since Cantare means “song” in Italian. I really liked it, I’m hoping they give an encore performance next week.

They had a small orchestra with two guitars, a drummer, two keyboard players and a violinist. Rather than having sheet music, they all had iPad’s on stands. I couldn’t see the screens but I’m guessing they all were scrolling automatically with the music. It’s pretty cool the way that small, wireless connected displays have worked their way into a number of different applications.

Susan headed back to the cabin and I caught the first set of the “BB King All-Stars”. The room was packed and I ended up standing at the back. There were a number of couples on the dance floor and the band was rocking. I’ve noticed that there is a lot of musical “off roading” that goes on when they play the smaller room. They pretty much stuck to the music when they were playing the concert. I do wish they would play an earlier show so I could see two sets without staying up so late.

Tonights towel creation was the most elaborate, an orangatang hanging from one of the hangers. It looks like it’s made up of three different towels. We got a number of good pictures with First Mate Pig. And for the Pig Fans out there, he’s having a great time on the cruise.