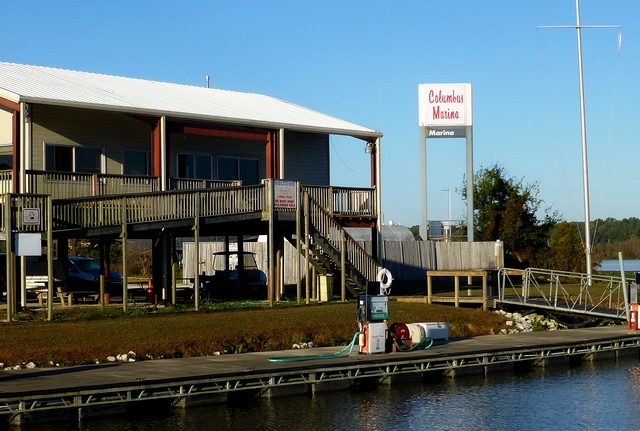 I had met the Captain of the Mara Beel the night before. He was going to leave at first light and head down. Our goal was to make Columbus, MS so we agreed to go together.

We were up at first light (7AM) and ready to go. We watched 4 other boats pull out of the marina, as we backed out and headed for the lock. The lock master had said if we were in by 7:30 AM he would lock us down ahead of an up bound tow, so we did a little hustle to get in and tied off. Success, I was on the wall ready to go at 7:25!

About 9 AM we entered an Eagle sanctuary, one of the many the ACoE has been building. I saw what I thought was a nesting pair in a tree. Before I could get to Susan to get a picture, they had flown off.

We had about a 45 minute wait at the Wilkins lock for a tow to come up. I was pretty good with the wait, it’s one of the shortest we’ve had since leaving Chicago. There were two boats that were much faster than us, they had zoomed to the lock and had to wait 1 ½ hours.

We cleared the Wilkins lock a little after 10 and headed the five miles to the next lock. Lock karma was with us again, the doors were open and we were in and out in under 20 minutes. Yay!!!

About 3 miles from Aberdeen the wind started to pick up, but we were pretty confident that we would be able to manage it. Our little group of Kindred Spirit, Mara Beel , Quo Vadimus and Miss Ginger entered into the lock. We all got tied off and we noticed that Kindred Spirit was having a little problem with their starboard tie. They made two passes and then the wind kicked up pushing them from behind. The Captain quickly spun the boat around and did a quick tie to the port wall. He was facing us, but was securely on the wall.

With everyone safe, the lock-master lowered us and we were soon out. Because of the way the canal was built, we were pretty shielded from the wind for the next 20 miles.

The canal empties out into a small lake just above Columbus. The wind had been building while we were traveling, so making the trip across the lake was interesting. We got into the dock with some effort. The wind was at our stern so it was fast work to get lines out and get our movement stopped.

The others arrived soon after and we all got settled in. We were just in time, the winds really started to kick up, my little wind gauge got gusts of 25MP+ (as fast as it reads).

We had Docktails with the crew of Mara Beel they have an Ocean Alexander, it was very nice. They have a full recliner, something that both Susan and I covet. We had a great time talking to them and sharing our adventures.

While we were talking the Captain of Onward (the second Camano 31 we’ve seen on the loop) doing a “reverse trick or treat”. He was going from boat to boat passing out candy for Halloween. I had not remembered it was Halloween until then. Time does fly!

Dinner was sausages, kraut and boiled potatoes, just the thing for a blustery day. We did learn that southern kraut has some extra sugar in it, but I thought it was pretty good.

As we got ready for bed the wind was still blowing pretty hard. I did one last check of the extra lines we had out to make sure we would be secure for the evening.