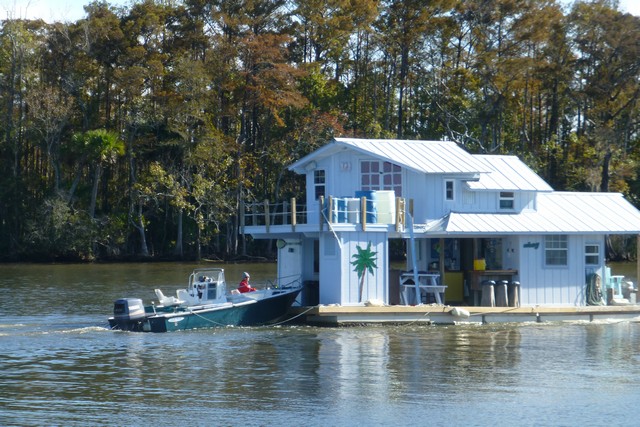 We are up today to the 60 mile run from Panama City to Apalachicola. My cunning plan is to go to Apalachicola today then on to Steinhatchee the next day. With a good weather shot we make it to Suwannee. way down on the Suwannee River. (Tell me you were not expecting that) We are then only 10 hours from Dunedin Fl, which would be doable even in a crappy day. And since there are crappy days ahead, it’s a great plan.

Off in the freezing weather, to get pumped out. We can do about 8 days on the boat between pump outs. It’s been 5 so far, and in theory I could make the other side. But to place it safe we got pumped out here in Panama City.

This is the side of the “Loop” that you don’t hear about, planning for fuel, water and pump outs.

Pretty tame trip, but the high point was seeing a real house houseboat cruising up the river. It’s a house built on a set of pontoons. It was pretty surprising to fly around the corner and see a house in the middle of the river.

Oh wait, the real high point was the five dolphins surfing on our bow wave. She made a little movie of it, you can see it in our video collection.

We were soon docked at Apalachicola Marina. We had company, the crew of Ta Ta was there in their nice 27′ Albin. I had looked at Albin’s. They have a center cockpit with a separate aft cabin with a queen bed. The forward cabin has the galley, salon and a Vberth and a head. It would fit under the bridge at Richmond’s, which is why it was high on my list.

The Apalachicola Marina is right downtown, so it was a short walk into the heart of the restaurant area. We went to the “Hole in the Wall” based on a recommendation from our friend on Corkscrew. Susan had the raw oysters and then fried oysters for dinner, I had the roasted oysters with Parmesan cheese / butter and then a crab cake for dinner. I’ve now learned that most crab cakes in this area use just the claw meat, which gives them more of a crabby flavor.

After dinner we walked around some more and came across the “Oyster City Brewing Company”. I had some of their beers during our stay in Panama City. I was excited to try some of the ones I had missed out on. Hooter Brown is a Brown Ale made with Tupelo Honey, very robust, but just a hint of the sweetness from the Honey. They also had an IPA that was very good.

The brewery was pretty standard with 6 fermentation tanks and the usual cooking equipment. They were busy doing repairs to the pump system, so we didn’t get a chance to talk to the brew master. Since it looks like I’ll be in town a few days, I’ll get another chance.

Back on the dock the temperature had dropped, but so had the wind. It would be a calm crisp night out. We had good view of some stars and the waning crescent moon.