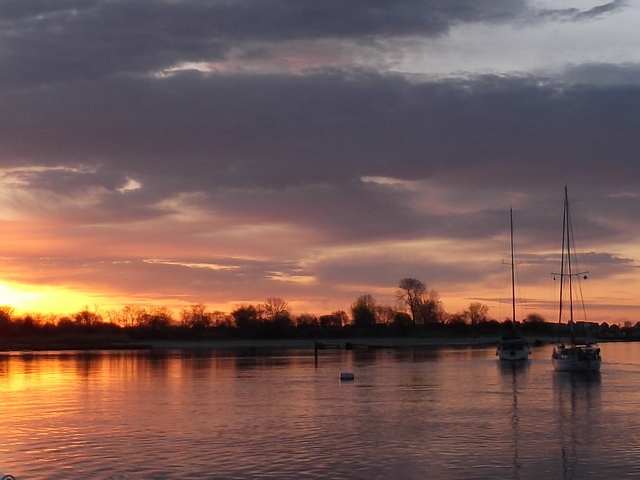 We left Atlantic City at 7AM to catch the last of the outbound tide and to get on flat waters. The ride up was nice and we were making good time. Rather than trying to navigate the shoals at Barnagat Inlet we decided to press on to Manasquan. This would add about another two hours to our trip, but we had music and flat seas, so why not?

If you watch the time lapse movies that Susan creates you can see that there isn’t much going on. We have an autopilot and for these long stretches I really rely on it to drive the boat. We are able to sit and chat, walk around, etc. We just need to keep an eye out for trash, crab pots (too early for that) and other boats.

We arrived at the Manasquan at noon, just about slack tide, but a fair amount of wind. We stopped at the Hoffman’s Marina fuel dock to get directions and to get the holding tank pumped out. We opted for the T-head next to the railroad tracks. After some maneuvering and a docking tip by Larry the owner, we were all tied up for the next few days. With the way the current rips through the river, having two sets of spring lines was an important part.

We opted for naps and hanging out on the boat the first afternoon. Susan made pork cutlets for dinner and we got caught up on the prior week of Mad Men.

Sunday was project/cleaning day. I had two sections of teak that needed some gentle sanding and a new coat of Cetol. Sikkens Cetol Marine varnish is the way to cover wood on a boat. It’s durable, comes in a light gloss and is $45 per quart. But a quart goes a long way. Both sections came out great, can’t tell that they were touched up.

On Sunday we found out about the current for real. With a west wind at 20kts gusting to 25kts the current was running about 5kts. Which made it interesting for boats coming against the current trying to get through the train bridge opening. I checked our lines often to make sure we would be OK. I was worried about the wind creating a super low tide.

By dinner time the winds had died down some so we walked about 10 minutes down to the Union Landing Restaurant. We ate inside, but there is a massive outdoor patio/bar that has a great view of Hoffman’s West Marina. I had the Clams Oreganato, clams stuffed with seasoned bread crumbs and garlic and the appetizer sized Shrimp Scampi. No need to worry about Vampires with all that garlic! Susan had the Union Landing Crab Delight – Lump Crab with Artichoke Hearts, Lemon Butter and Parmesan Cheese since she loves artichokes.

Monday was clear but a little windy. We knew our next stop was New York Harbor, and I wasn’t thrilled trying to dodge boats and 3′ waves. Our plan B was to head into town. We walked the 1.5 mile into town to pick up some items at the drug store. Since it was Cinco de Mayo we had to have Mexican food. We ate at Bubbakoo’s Burritos. I had tacos with the mango sauce, very good with the pork. On the way back we stopped at the local Acme and headed back to the boat for naps.

After napping I went over to Hoffman’s West (just across the railroad tracks) to talk to the crews of Happy Hours II and Whisper. Whisper was heading up to Boston, Happy Hours II is taking the Erie Canal back to Ohio. We had met them at Utsch’s Marina in Cape May. Their plan was to sail at first light for NY. They were successful, as you can see from the photo above.

On Tuesday we slipped away from the dock about 7 AM to head north to the Big Apple!

One thought on “Visiting Manasquan”