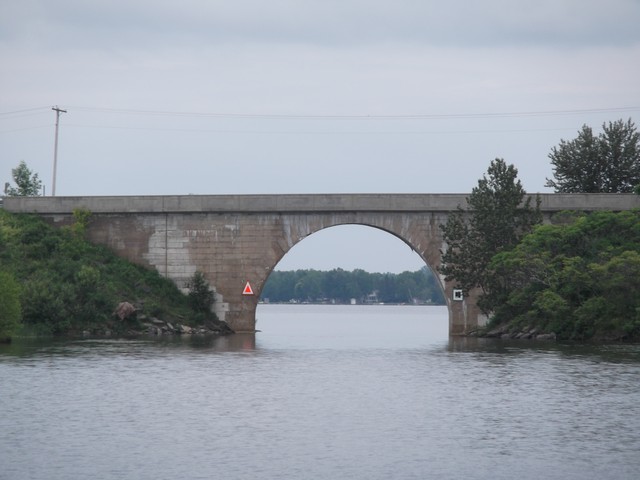 We spent some extra time in the morning at Rosedale after they got the wireless to work. Susan got some pictures up and I got a chance to write the Rosedale post.

We got off the dock at 11:30 AM on a pretty overcast day. Not the best for traveling, but the forecast was for things to improve as we went along the day. We were soon out in the lake passing Grand Island. It’s home to 41 families and 202 cows. The night before I had talked to a resident that was getting delivery of a new sofa and he gave me the full story.

About 12:30 we entered the Kirkfield Channel. It’s a long stretch of narrow canal. There is a sign at both ends asking boats over 40′ (that’s us) to announce that they are entering the channel. This allows big boats to pace themselves so we don’t need to pass each other. I’m sure I could pass another 45′, but the Kawartha Tour boat at 100′ is a different story.

It’s a little freaky to look into the water. It’s very clear and you can see the rocks at the bottom. At home when we see the bottom, we are most likely already aground. In this case the bottom is 10′ down. But we keep an eye out anyway.

There are also weeds. Up until now the weed growth has been light, but now that the water is warmer, the weeds have had a chance to take off. The weeds freak the depth finder out. If the clump is dense enough it will register as the bottom. So I watch the gauge go from 10.5′ to 1.2′ to 8.9′ to 1.3′. Lots of trust in the chart, the GPS and Susan’s eagle eyes at the bow.

We pull into the Kirkfield Lift Lock a little after 1PM. We will be going down, so rather than pulling up to a wall like Peterborough the water ends at the end of the pan. We can see the tops of trees just past the bow of the boat. The lift team guide us into place and we tie off. The door clangs shut behind us. “Please keep your hands inside the ride at all times” flashes through my mind as we rapidly drop the 60′ to the river below. In less than 5 minutes we are on our way down the second part of the channel.

At the end of the channel is a small lake (Channel Lake) that feeds us into Bolsover and another set of small channels. The next lake had an interesting round bridge that we had to go under. (It’s the title picture). I wasn’t sure how it would work since we are mostly square. We folded down the antenna’s and we just fit

We had planned to spend the night at the top of the Bolsover Lock (#37) but there was construction going on. We had a chat with the Lock Master, he called the other locks and they decided that Lock 39, Portage would be the best place to stay.

One of the problems we have on doing the “down locks” is Susan reaching the cables to be able to tie off. At this set of down locks the lock team have taken our lines and looped them around the cables and handed them back. This has made the process a lot simpler.

We quicky cleared Lock 37 at Bolsover and headed towards are next lock. Because this section was also dug, it’s long and straight. Sadly it’s over pretty flat ground, so you miss the stone on either side and get the feeling that you are moving down a Texas sized drainage ditch (sorry Canada). But it’s very pretty countryside.

We cleared the next lock at Talbot #38 a little after 3PM. Since we knew the next lock would be home for the night, we drifted down to the top of lock #39 Portage. We were surprised, the lock team showed up to make sure we got tied up for the night.

We broke out the bikes and biked down to Lock #40. Two Looper boats Grey Fox and Knot So Fast were at the bottom. I had talked to Grey Fox a few days ago. It’s a really nice catamaran that makes a great loop boat. We chatted with all of them, for a few minutes and then headed back on our bikes.

Susan displayed her cookout camping skills and made a great dinner. After dinner we had visitors from a mink family that Susan posted about. After the mink adventure, we both tried our hands at fishing. Lots of nibbles for me, Susan caught two small blue gills. She has been a regular Joan Wulff on this trip.

Since we were far away from towns, I got up in the middle of the night to check out the stars. I was thwarted by Mother Nature, the sky was still overcast. Oh well, we will be in the Georgian Bay soon, I can look then.