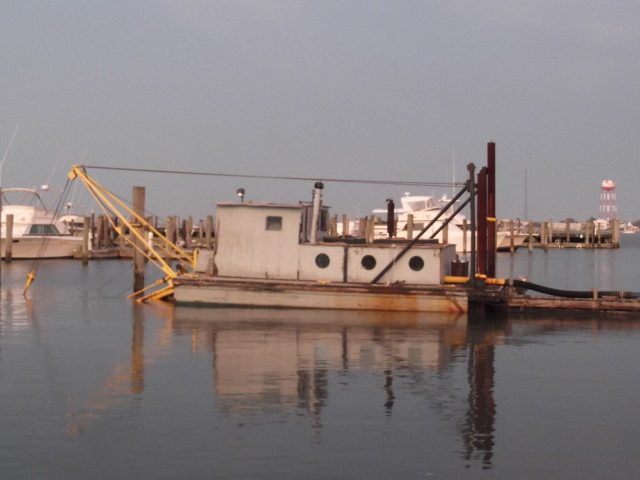 When water, wind and tides are involved, there is a constant movement of the ocean floor. Same with a marina, silt washes in through the entrance and slowly fill the slips and basin with additional material. A large storm can hasten the flow of material.

Tonight we watched the dredge at work clearing out slips and the basin. The dredge sits on a powered barge. At one end is an A-Frame that has a single beater about 3′ across. The beater is lowered into the water where it stirs up the silt layer. A large pump driven by a two cylinder diesel engine sucks water from next to the beater and up a long 10″ diameter flexible hose. The hose runs about 400′ into a giant catch pit.

The fluid, about 5 parts water to one part material, sprays across the entire pit. The water filters down through the ground and out, back into the marina. They can dredge a 30′ wide path 6 feet down at about 10 feet per hour.

The dredge in the picture was built in 1950 from parts from 1930′s trucks. The builder was self taught, and built the dredge platform and all of the machinery without plans. It’s been used a number of times to dredge the marina.

They started a year ago and have about a third of the marina done. The dredge works a double shift, the night shift there is very little boat traffic to work around. They are hoping to get two more rows done before boating season really takes off.

The silt is sold as topsoil after a year. The first year nothing will grow with the high salt content. Once the rain and snow have a chance to work, the salt flushes away and then the silt with its high nutrient content is left.