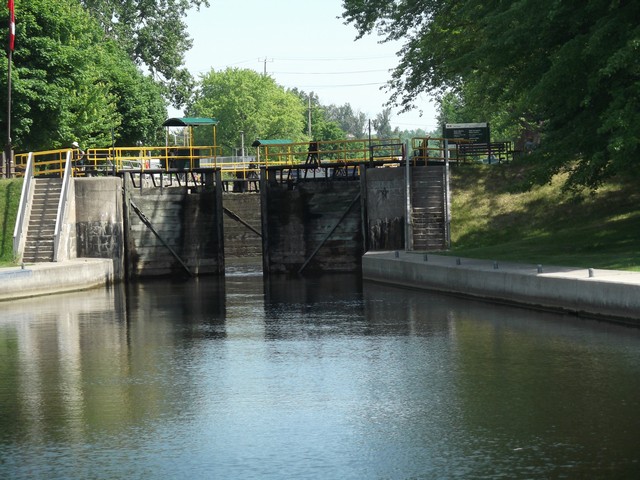 We left the Peterborough dock on a great sunny day, perfect for going through the lift lock!

First we needed to go through the smaller Lock #20 “Asburnham”. As we entered the lock, the two front screws holding the shifter together popped out of the shifter. I was still able to get to the wall, but since today would have 6 locks in it, I wanted to see what was going on.

Since there was no traffic, the lock master said I could work on it until they needed the lock again. In about 10 minutes I got one of them back in and figured out that it would hold for the rest of the day.

We moved forward into the Peterborough Liftlock at 11:30. (Quick refresher on how Lift Locks work. There are two giant pans filled with water. They fill the upper pan with an additional 150 tons of water. Using two interlocking pistons the heavier pan pushes down which pushes the other pan up. Another case of “gravity is your friend” engineering.) 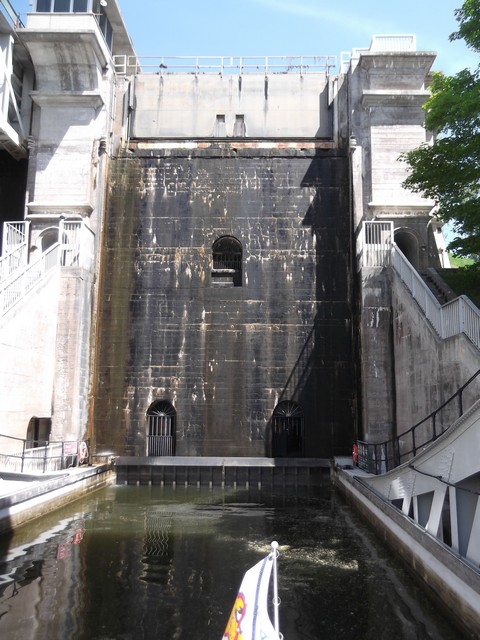 The lock crew we had talked to the day before were on duty and they remembered us. We were soon in place and going UP. The view from the front was pretty boring, just a massive concrete wall, but the view from the back was very disconcerting and exciting. The worry person (Worry is a poor use of imagination) about those tiny pins that hold the back wall of the pan in place. And what do all those pops and pings coming from the lock mean?

The exciting was watching the Peterborough countryside drop away below our stern. The first few moments are pretty slow, but as the momentum builds up as the heavier, upper pan starts to drop. It’s really like going up an elevator with an outside view minus the protective glass.

We were soon on our way for the 4 mile ride to Lock 22 Nassau Mills. It is really pretty stretch of river and it passes through the middle of the Trent University Campus. Since they are on the river, they have their own hydroelectric plant that supplies most of their electricity. The campus is connected by The Faryon bridge, which looks very cool from the water.

We arrive at the Nassau Mills lock at noon and watched the group in front of us sail away. We waited a few minutes and then tied off on the blue wall and headed up to see what the delay was. Everyone was gone, but we knew it was a roving crew, they would be back later. We had a great lunch that Susan made. I finally called and Zack said the would be back at 2PM. Since the lock system closes at 4 PM this didn’t bode well for us making it to Lakefield. 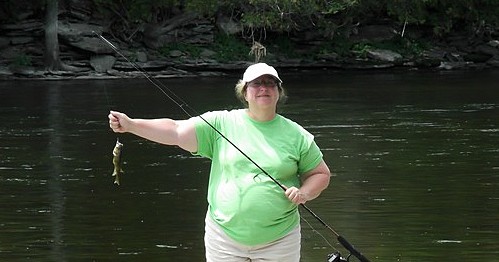 At 2:40, Zack shows up and we are up and away. He asked how far we wanted to go and got a frown when we said Lakefield. I reminded him that we had been at the lock since noon, he said he had seen us, but they were short handed.

At the base of the Douro lock we are met with the Lock supervisor of the Otonabee River locks. He said that this was as far as we could go, it was after 3:30 PM. This didn’t make me happy, but it was a nice spot, so we settled in for the evening.

We set up chairs on the lock wall in the shade of the trees. Our vista was the Otonabee river and a farm. We had cows coming down to drink and flocks of geese winging overhead. It was a very pastoral view, and with the last of my Churchkey Holy Smoke in hand it was a great place to relax.

Susan was all set to use (and show off) her amazing camping skills. She set up on the picnic table and soon was working on a great dinner of pan fried pork tenderloin, noodles and her version of “bubble and squeak” (fried cabbage). It was wonderful. 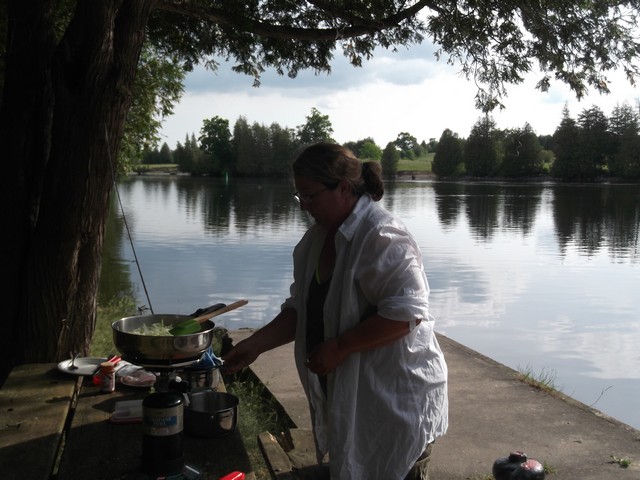 After dinner both Susan and I fished. Some nibbles, but no catches. Soon the mosquitoes drove us inside.

Tomorrow, on to Lakefield!